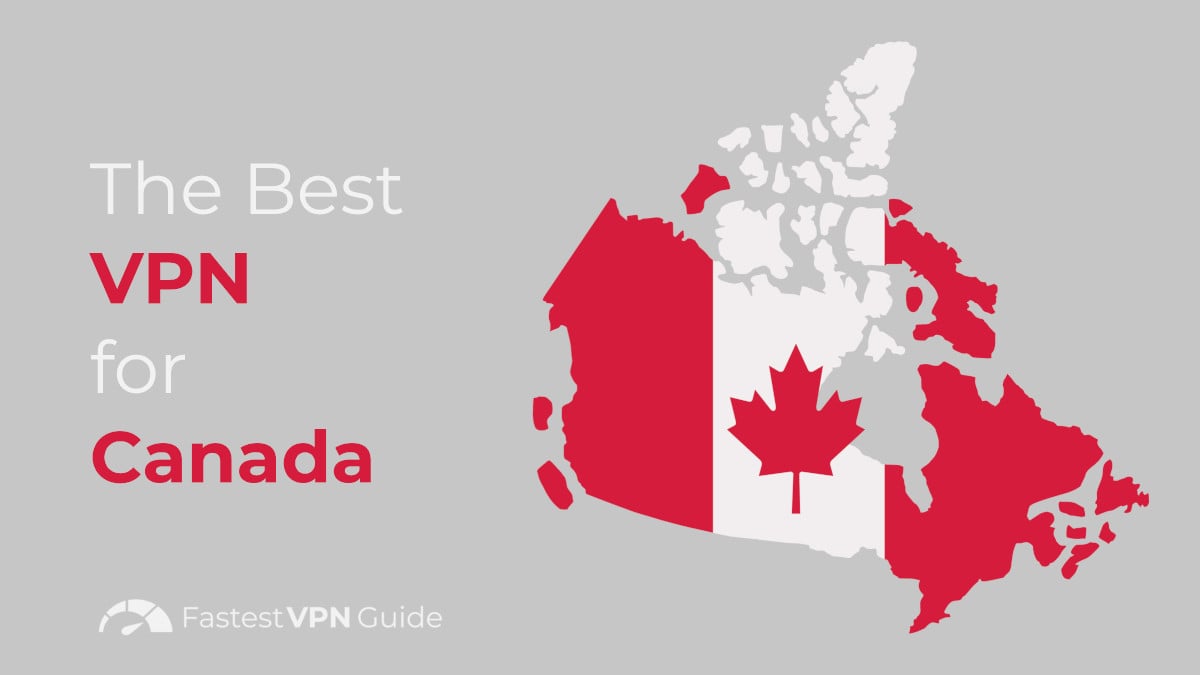 When you think of countries where you should use a VPN, Canada rarely (if ever) makes anyone’s list. But, just because netizens of the Great White North tend to enjoy a good amount of online freedom, doesn’t mean VPNs should be ignored.

Outdated Canadian privacy laws, mass online surveillance, and increasingly draconian copyright laws are all strong arguments for VPN use. So is the fact that without a VPN, you’ll always be an easier target for cybercriminals, especially on a public Wi-Fi connection.

Then there is a VPN’s ability to access geo-blocked services normally not accessible to Canadians, like Netflix US, Hulu, or the BBC iPlayer. And it’s a two-way street too. If you’re outside Canada, a VPN is by far the easiest way to watch Canadian content.

With the number of services available in the market, what is the best VPN for Canada is not necessarily obvious. To help, I’ve prepared this quick guide. You’ll not only find out in much greater detail why all Canadians should at least consider a VPN, but also get a better understanding of what to look for and which VPNs check all the right boxes.

Overview of the Best VPNs for Canada

In case you’re already sold on using a VPN and are just wondering which of the many services make a good option for Canada, here are my top five picks.

Why Use a VPN in Canada

There are plenty of reasons why Canadians should consider using VPNs – and why many already do. From improved privacy and anonymity and better online security to an unrestricted internet experience, here is an overview of the major drivers of VPN use in Canada.

Are VPNs Legal in Canada?

Yes, using a VPN is legal in Canada. Anyone in the country can do so for any of the reasons mentioned above. Those include better internet privacy, preventing surveillance, and accessing various websites and online services. There are no government laws or regulations barring VPNs on either the federal or provincial and territorial levels.

Beyond personal use, VPNs also can be and often are used by Canadian remote workers, journalists, and government employees for countless work-related activities.

That all said, even though regulations don’t prevent you from using a VPN in Canada, you shouldn’t use one to do anything illegal. Whatever you do online is still your responsibility. If caught breaking the law, you can be held legally accountable, virtual private network or not.

What to Look For in a VPN for Canada

When choosing a Canadian VPN, there are several features any provider worth considering should have. While some of these are not critical, the more of these boxes a VPN checks, the better.

The features to look for include:

Scrutinizing providers for each of these features may seem daunting. But, you’ll be surprised how quickly you can get it done. And it’s time well spent too, avoiding potential disappointment and frustration later on.

As an aside, all VPN providers I recommend on this page as good choices for Canada check all the above boxes. So, you can always look into them first. Any one of them could be a good fit for you.

You now know what to look for in a VPN for Canada. Below are what I believe to be some of the best choices around.

Few providers have as high of a public profile as NordVPN – and it’s well deserved. They’re simply an excellent, excellent VPN service.

NordVPN calls Panama home and has a strict and third-party audited zero-logging policy. It also offer plenty of privacy features like a double VPN, obfuscated servers, and TOR over VPN. That is all great news for those of us seeking anonymity.

Their server list includes over 5200 servers in 59 countries, with a heavy presence of 256 Canadian servers in Montreal, Toronto, and Vancouver. It’s a very fast network too – in fact, currently the fastest there is.

NordVPN also does an uncanny job of unblocking geo-blocked content, including Netflix, in just about every country on the planet. And P2P is allowed everywhere.

Client support is easy to get in touch with 24/7 over email or chat, and if you’re on the fence, you get a long 30-day money back guarantee to make sure this provider is exactly what you need.

Although a relatively young company and not as well-known as some of its competitors, Surfshark has quickly made a name for itself as a top-notch VPN service.

Based out of the British Virgin Islands – a country with zero data retention laws – Surfshark doesn’t monitor, track, or store anything about what you do online.

They have slightly fewer server locations than their peers, but over 3200 servers in 99 is still nothing to sneeze at. Canada is well represented with a good number of servers in Montreal, Toronto, and Vancouver.

To top it all off, Surfshark is the least expensive provider on this list – and even moreso if you’re able to take advantage of a sale. No other VPN offers Canadians so much for so little.

If you need a VPN provider that does just about everything well, look no further than CyberGhost.

They boast a network of over 9203 servers in 91 countries. Of those, 484 servers are in Canada, running out of data centers in three locations. Performance on all that hardware is excellent.

CyberGhost is based in Romania – an excellent jurisdiction for a VPN – and keeps no logs.

They’re also one of the not so many VPNs that devote significant resources to maintain streaming access, with multiple servers dedicated to specific services. P2P is, of course, also supported across almost their entire network.

CyberGhost can make an excellent choice for VPN users, in or out of Canada. And considering how inexpensive the service is – especially if a coupon code is available – combined with a best in industry 45-day money back guarantee, you just can’t go wrong.

A well-respected veteran of the VPN industry, PureVPN has been around since 2007.

Their claim to fame is a very well performing network of servers that spans 74 countries. Every major location you can think of is covered. PureVPN also, of course, run plenty of servers in Canada with data centers in Montreal, Quebec City, and Vancouver.

PureVPN’s other claim to fame is their ability to get around content geo-blocks. In fact, they run dedicated servers for nearly 70 channels from countries all over the world, including Canadian broadcasters CTV and RDS. And their excellent speed test results mean streaming at even the highest quality settings with no annoying pixelation or buffering.

This is a VPN provider that is also P2P friendly, keeps no logs, and offers plenty of features in a client app that is supported on over 50 platforms and devices.

Priced super competitively, PureVPN gives you a 31-day no-hassle money-back guarantee – plenty of time to try them out.

ExpressVPN is another VPN service provider you just can’t go wrong with for Canada.

Incorporated in the privacy-friendly British Virgin Islands, ExpressVPN is a strict no-logging VPN. It comes with some of the most advanced security features and standards available, including 4096-bit RSA keys, SHA256 authentication, and 256-bit encryption.

With servers optimized for speed, ExpressVPN is the perfect solution for anyone that likes to stream high-definition video or use P2P file sharing – the latter is available network-wide.

And speaking of the network, ExpressVPN’s server list is extensive, with 3000+ servers in 94 countries and 150 locations. Three of those locations are the cities of Montreal, Toronto, and Vancouver.

If there is a downside to ExpressVPN is that they’re a little more expensive (be sure to take advantage of any current discounts). That said, considering how good this service is, I think it’s money well invested. And there is, of course, a 30-day money-back guarantee, giving you lots of time to make a final call.

How to Get the Best VPN Speeds in Canada

For the best online experience possible when using a VPN – both in Canada and anywhere else in the world – there are two big things to consider.

First, use a VPN that has stellar speed test results. All the providers I’ve listed above meet that criteria.

Next, you should try connecting to a server as physically close to you as possible. It reduces the distance your data needs to travel. That’s why it’s important to pick a provider with plenty of locations both in Canada and in any other country you want to access – it gives you VPN connection options close by.

So, for example, if you would like to stream the CBC from Europe, choose a location on the east coast of Canada. Connecting to a Vancouver server will add thousands of unnecessary kilometers to your data’s journey.

Even if you follow the above advice, you may still sometimes find yourself with a slow connection. If that’s the case, there are several other things you can try to speed up your VPN.

Also, note that, except for cases of ISP throttling, a VPN will not make your internet connection faster. Whatever your regular connection speed is is the best you can expect.

Earlier, I touched on the sub-par internet privacy situation in Canada. Here are more details on the laws that make investing in a VPN a pretty good idea.

Using a Free VPN for Canada

Using a free VPN service in Canada, even for occasional use, is, unfortunately, not the best option. Free providers continue to have a terrible reputation for not protecting their users. And sometimes, they even unnecessarily put them in harm’s way.

The problem with free VPNs is that they’re exactly that – free. It takes a good amount of money and resources to run a VPN. Since free providers don’t have subscription fees to rely on, they turn to tactics like ad injection and selling user data and online activity history.

To prevent their networks from getting overwhelmed, they also typically have significant speed and bandwidth restrictions.

And we haven’t even touched on the fact that many free VPN apps – at one point a whopping 38% on the Google Play store – contain malware.

In my opinion, free VPN services are simply not worth the risk, especially with ultra-affordable options like Surfshark in the market.

From government data collection and questionable ISP privacy practices to a legal system that can punish you for even perceived copyright infractions, there are a ton of reasons to use a VPN in Canada.

A VPN is also an excellent way to keep in touch with home when abroad or to access the many online entertainment options the Great White North and other countries have to offer.

Whatever your reasons for wanting a VPN for Canada, you now know how to find the best of the best. You also have a list of the five top providers to look into as a starting point (most of them have big sales on right now too).

Start using a VPN and get the online freedom, security, and privacy we all deserve.