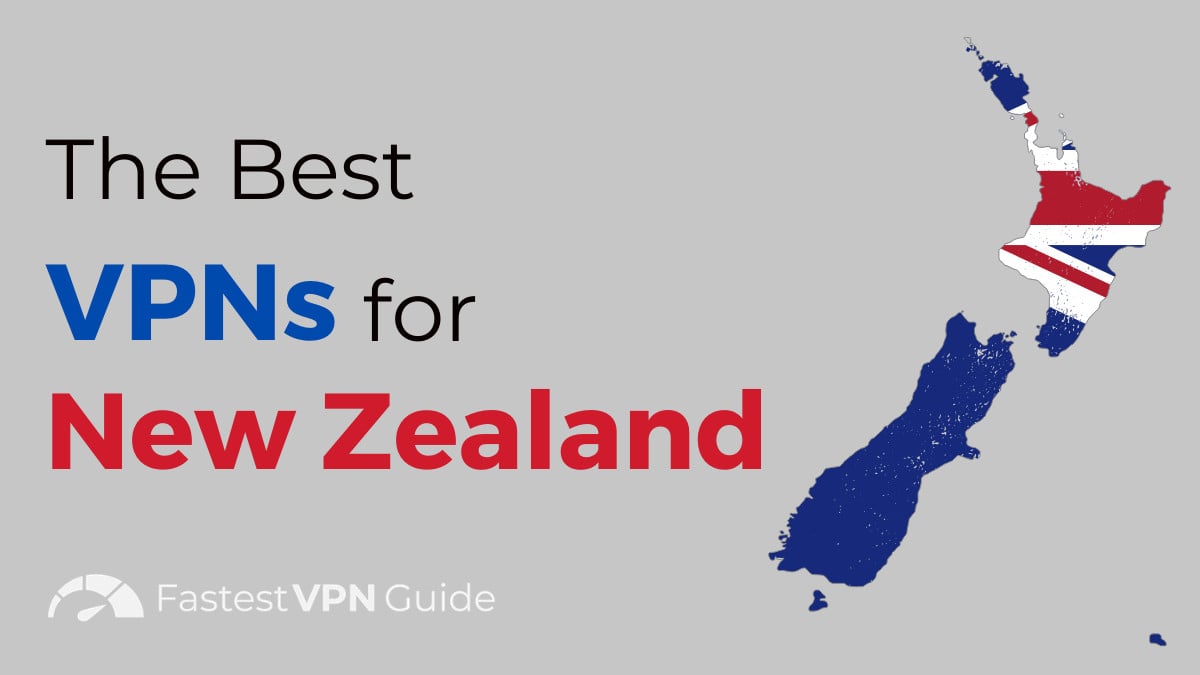 There are plenty of reasons to use a New Zealand VPN.

The country is part of the Five Eyes intelligence network and has a government that has been known for playing loose with privacy laws. New Zealand’s streaming services are relatively limited – including no Hulu and a smallish Netflix library.

And forget about accessing content geographically restricted to NZ anytime you’re outside the country, too.

A VPN can fix all that (and more).

It can give you the anonymity and internet privacy we all deserve, keep you safe from certain online threats, and let you access just about any streaming service you want – regardless of where you’re located.

So, whether you’re a serial binge-watcher, a P2P user, or a privacy-first netizen, read on. In this article, I’ll help you choose the best VPN for New Zealand – one that that meets all your needs.

In a bit of a time crunch? Here’s a quick overview of what I believe to be the top VPN providers for NZ 2022:

Why Use a VPN in NZ?

VPNs let you stream content from abroad, protect you from hackers, and give you online privacy and anonymity. Those the top reasons to use a VPN in New Zealand in a nutshell. Here they are described in much greater detail:

Are VPNs Legal in New Zealand?

Can you even use a VPN in NZ?

You’ll be happy to know that yes, VPNs are perfectly legal.

Of course, if you commit a crime online, it is still a crime. Using a VPN doesn’t make copyright infringement or a questionable shopping spree on the Dark Web any less of an issue.

But, as long as you stay on the right side of the law, using a VPN in New Zealand is A-OK.

What To Look for in a VPN for NZ

Before digging deeper into the top New Zealand VPN providers, let’s talk about what makes a good VPN in the first place – which features matter for NZ and which are marketing fluff.

Do any VPNs check all the boxes we just went over above? Yes, many do.

Before you make a choice, I strongly recommend doing your own research. Only you can say with certainty which provider will meet all your needs.

But, if you need a place to start (or can’t be bothered to dig through Reddit, review sites, and tech blogs), here are my top picks for the best VPN in New Zealand.

With a vast server network, breakneck speeds, excellent streaming support, and top-notch privacy features, NordVPN is hands down the number one VPN for New Zealand.

You get access to nearly 5500 servers in 59 countries – there are several dozen in New Zealand alone.

NordVPN unlocks just about any streaming service imaginable without a hitch, no matter where you are. And their performance guarantees uninterrupted viewing, even in 4K.

Along with the regular servers, NordVPN has dedicated P2P, obfuscated, and double VPN options for all your privacy needs. The provider also maintains a strict no-logs policy – backed by an independent third-party audit.

Overall, NordVPN is the most well-rounded and full-featured VPN on this list. Top it all off with a 30-day money-back guarantee, and you simply can’t go wrong.

If you’re looking for a fantastic bargain, top-rated Surfshark should be on your shortlist – they’re the least expensive top-tier provider around.

But don’t let the affordable pricing fool you. This VPN newbie offers so much more.

In an ocean of VPN services, Surfshark stands out with unlimited device connections (no one else does this), a clean client interface, and fast, reliable connection speeds.

Those excellent speeds translate to buffer-free streaming and quick P2P downloads (which are allowed network-wide).

With a big server list, plenty of privacy features, strong encryption, the latest VPN protocols, and helpful customer support, Surfshark does it all – for less.

PureVPN is an excellent performer with a big server network of 6535 servers in 74 countries – every location you could want is present and accounted for.

In New Zealand alone, they run 90 servers (all located in Auckland), extensively optimized for speed and privacy.

With ten simultaneous connections and no bandwidth limit, PureVPN will let the whole family enjoy a more secure, private, and geographically unrestricted internet. And with their current sale, you’re looking at one excellent deal, too.

CyberGhost is a well-established (and well-loved) VPN provider that offers an impressive 9000 servers across 91 countries.

With such an extensive network, this VPN can get you access to geo-restricted content pretty much anywhere in the world. Server speeds are consistently high, too – perfect for lag-free streaming and gaming.

A slight downside for Kiwis is CyberGhost’s P2P offering. While they run multiple New Zealand servers, none of them are torrenting-optimized. That doesn’t mean you can’t use them for P2P. But, to get the best performance, you may have to connect to a server abroad.

CyberGhost does everything else so well, though, they’re still more than worth considering. And with the longest in the industry 45-day money-back guarantee, you get plenty of time to make sure it’s right for you.

Last but certainly not least, is reviewer favorite ExpressVPN. Often praised for their security and privacy features, this provider does just about everything else right, too.

Performance is top-notch, making ExpressVPN a great choice for streaming and downloads. Server counts are also impressive, with 3000+ servers in 95 countries.

As eluded to earlier, ExpressVPN is an excellent choice for protecting your information online, too. Military-grade encryption, secure protocols, and a third-party verified no-logs policy are all part of the package.

And their customer support is second to none.

If there’s a downside to ExpressVPN, it’s the cost – they’re not an inexpensive provider. If you’re considering them (and I certainly would), look in on any discount deals they may currently be offering.

Can You Use a Free VPN for New Zealand?

Yes, you can use a free VPN in NZ. That said, expect a bumpy (and sometimes downright dangerous) ride.

For one, free VPNs rarely unblock streaming services. Platforms like Netflix have excellent VPN and proxy detection methods, and free providers are the first ones to get banned. These days, only a handful of subscription-based VPNs have the resource needed to work reliably.

Most free providers also have data and bandwidth caps. Even if you get lucky and find one that gets you Netflix access, you likely won’t be able to finish watching a single movie before your monthly allowance runs out.

But, most importantly, many free VPNs are a security risk.

Up to a third of them are infected with malware, and most will log and sell your data. Some also engage in dubious advertising practices, going as far as rerouting you through secret servers.

The bottom line is this:

Free VPNs, while tempting, come at a price. I firmly believe that our sanity, safety, and privacy are not worth the savings – especially when excellent providers like Surfshark cost but a couple of dollars per month.

Whether you want to catch a Super Rugby game from abroad, watch Hulu (not available in NZ), or evade the ever-so-invasive Five Eyes alliance the New Zealand government is a part of, a VPN is the tool for you.

Remember, to choose the best VPN for New Zealand:

There are several providers that are an excellent choice. Among them, though, NordVPN is my favorite.

On top of checking all the above boxes, Nord is also affordable, streaming service friendly, and dead simple to use. And with a 30-day money-back guarantee, you can try the service for a whole month completely risk-free.