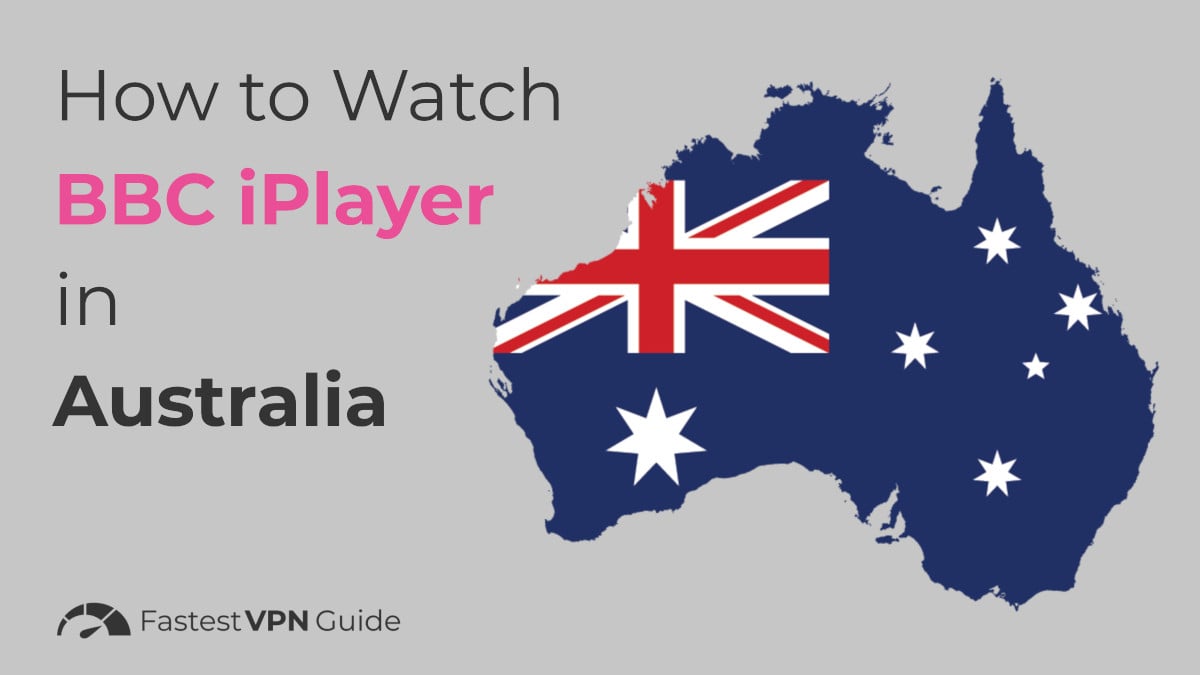 If you’re a fan of British TV and live in or are visiting Australia, access to the BBC iPlayer is a must. From popular shows like Killing Eve and EastEnders to top Premier League fixtures and countless special sporting events, the BBC has it all.

Officially, though, the BBC’s streaming service can be accessed only from inside the UK. Does that mean then that you’re out of luck?

Not at all. Where there’s a will, there’s a way. And, in this case, the way is quite simple.

To watch the BBC iPlayer in Australia, all you need is the right VPN provider. Armed with one, British programming will always be just a couple of clicks away, even from the land Down Under. Watching foreign content is one of the best uses for a vpn.

Here are the three simple steps you need to take to stream the iPlayer from Australia.

Why Use a VPN to Watch BBC Programming From Australia

The BBC uses a technique called geoblocking to stop you from watching the iPlayer from Australia – and indeed, from anywhere else outside Great Britain. Netflix, Hulu, and just about every other streaming service do something similar.

Geoblocking works by checking your device’s IP address. Among other things, the IP reveals from where you’re connecting to the internet and can usually pinpoint your location to within a few kilometers.

If you’re outside the United Kingdom, it’s access denied:

BBC iPlayer only works in the UK. Sorry, it’s due to rights issues.

A VPN hides your real IP address and replaces it with one belonging to the VPN server you connect to. Connect to a British server, and the iPlayer thinks that’s where you are. And because you “are” in the UK, you get access to everything the BBC has to offer.

When choosing a VPN to watch the iPlayer, not any old provider will do – there are a few things which are must-haves.

The VPN has to run servers in the UK. Without them, you won’t be able to fool the BBC into thinking that’s where you’re located.

Top-notch connection performance is also a must. Because of the geographical distance to the United Kingdom, this is especially important Down Under. With poor speeds, expect poor video quality and buffering galore.

Finally, the VPN needs to work with the BBC – not all do.

The BBC is well aware of how VPNs can be used to sidestep geoblocking and does its best to stop them. Only a handful of providers have the resources and technical know-how to stay a few steps ahead.

With that said, below is a list of what, in my experience, are your best VPN bets for unrestricted whenever you want access to the iPlayer from Australia.

The best choice for watching BBC iPlayer from Australia (and anywhere else in the world, for that matter) is, hands down, NordVPN. 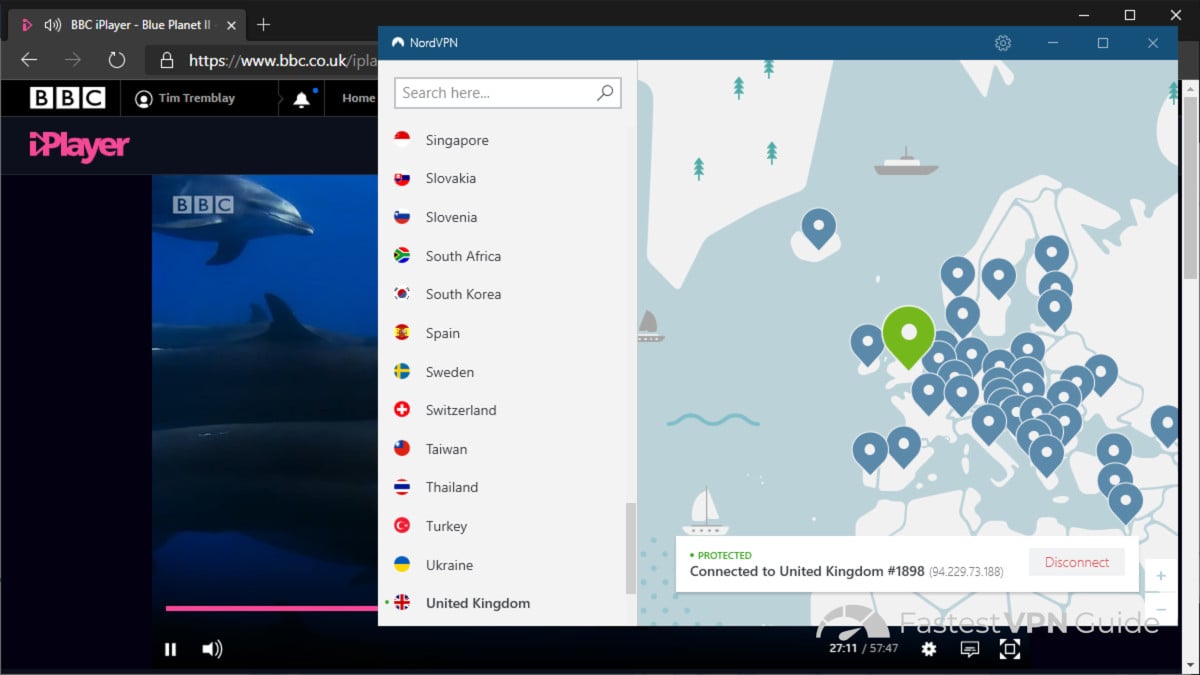 The provider’s ability to get around geo-blocked content is second to none. Not only does it work well with the BBC, but also with other popular British streaming services like Netflix UK, ITV, and Channel 4.

NordVPN happens to be one of the fastest VPNs in the market too, with top-notch server speed test results worldwide.

And speaking of servers, NordVPN currently runs 607 of them in the United Kingdom, and a total of 5490 in 59 countries around the globe – it’s a very nice network indeed.

Top it all off with excellent customer support and a 30-day money-back guarantee, and this is a provider you simply can’t go wrong with.

Surfshark has only been around for a few years but has quickly ascended to be one of the best VPNs in the market. It’s another great choice for unrestricted access to the iPlayer from Down Under. 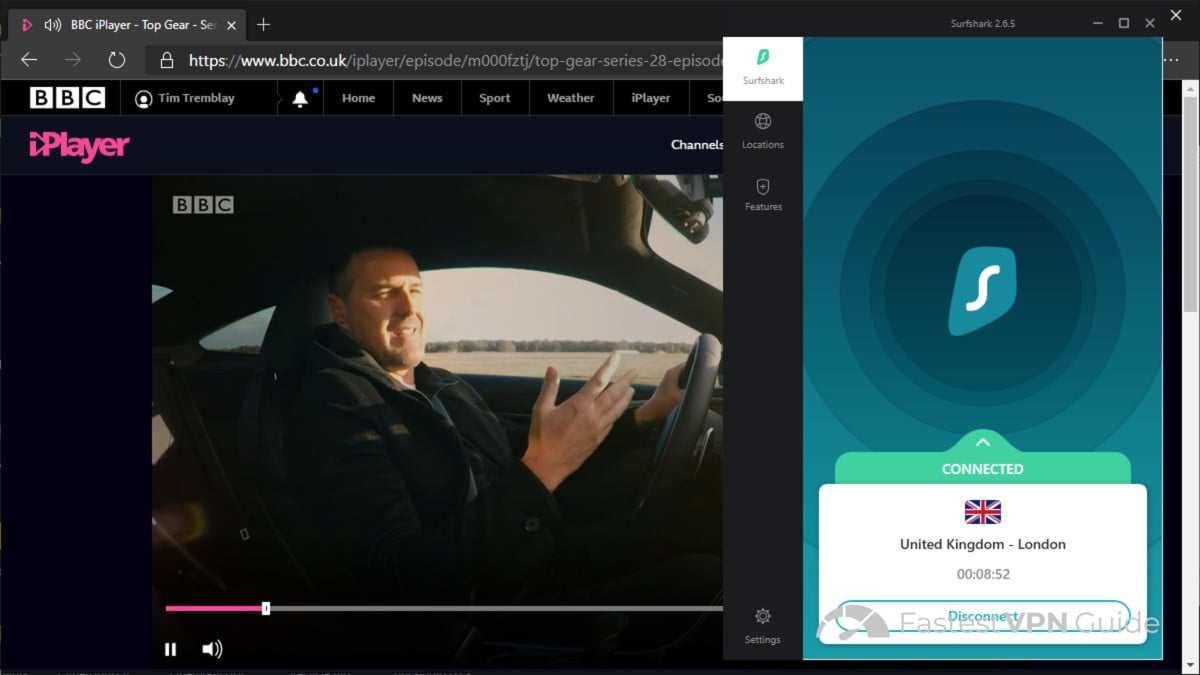 The VPN includes a 3200+ server network in 96 countries, and a good chunk of them are based in the UK.

Server speeds are excellent. Surfshark should have no issues streaming video at the highest settings even as far from the United Kingdom as Australia.

A unique feature of Surfshark is that it allows an unlimited number of concurrent connections. That means every device you and your family own can connect to it at the same time.

Surfshark also happens to be the least expensive top-tier VPN there is – no other provider gives you as much for so very little.

With 751 UK servers in three cities, you also can’t go wrong with CyberGhost as your BBC VPN of choice. 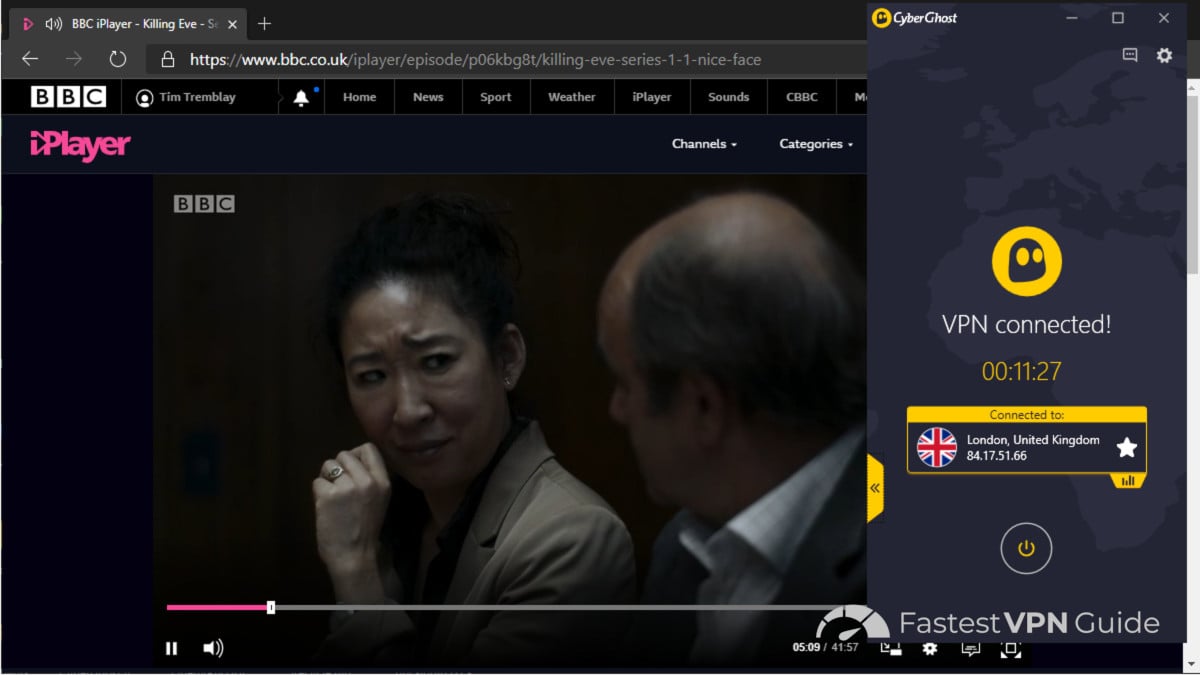 Unlike most other providers, CyberGhost explicitly optimizes several of its servers for both connectivity and performance with the iPlayer, so you always know where to connect.

On the subject of performance, it’s excellent across the entire network, which is an impressive list that includes 9000 servers in 91 countries.

At 45 days, CyberGhost has the longest money-back guarantee of all VPNs, giving you lots of time to check and double-check it’s the right choice for you.

And if you do decide to give CyberGhost a try, don’t forget to check out their current deals first – you could save yourself a good chunk of change.

PureVPN markets itself as is a VPN service for streamers. And, indeed, it delivers. Not only is there a dedicated server for BBC watching, but it works flawlessly every time I test it. 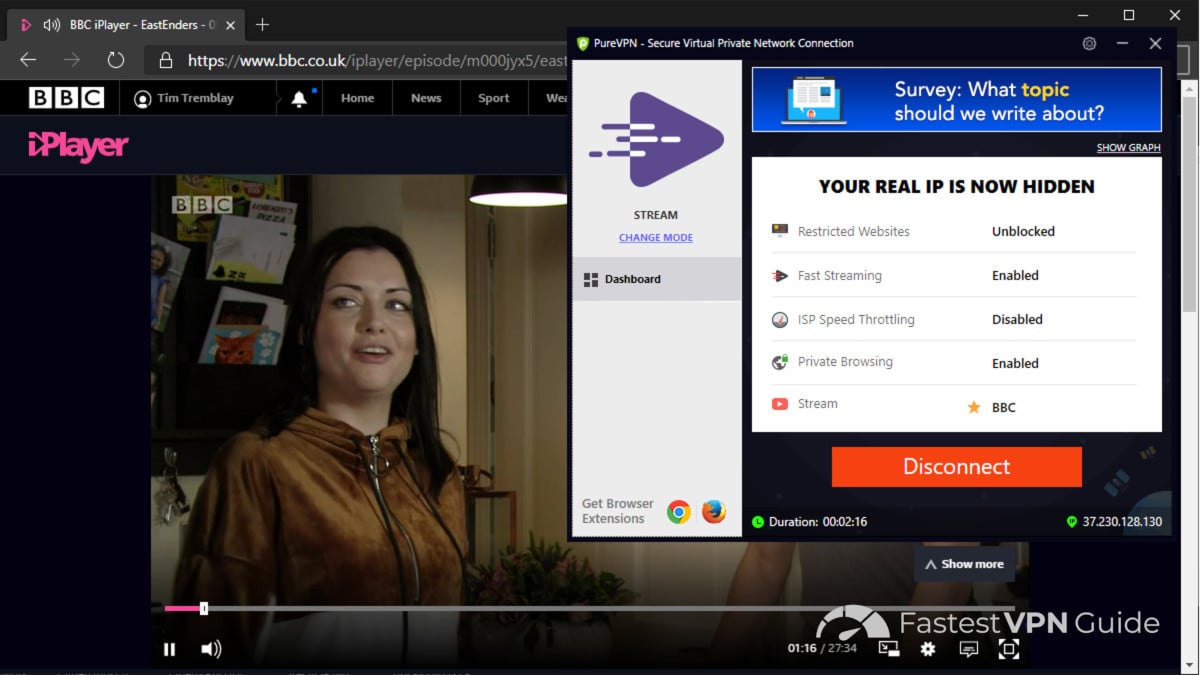 There are dedicated servers for other British streaming services too, including Netflix UK as well as ITV and Channel Five.

PureVPN’s other claim to fame is its large list of servers. We’re talking 6535 severs in 74 countries, of which 1047 call the UK home. Server speeds are much faster than anything you’ll need for even the highest quality video streams.

You also get a generous 31 days to try out the service risk-free – though I’m betting it’s not something you’ll be falling back on.

ExpressVPN rounds out the list of VPNs for iPlayer access from Australia. They’re yet another provider that does a great job of thwarting the BBC’s geo-blocking efforts. 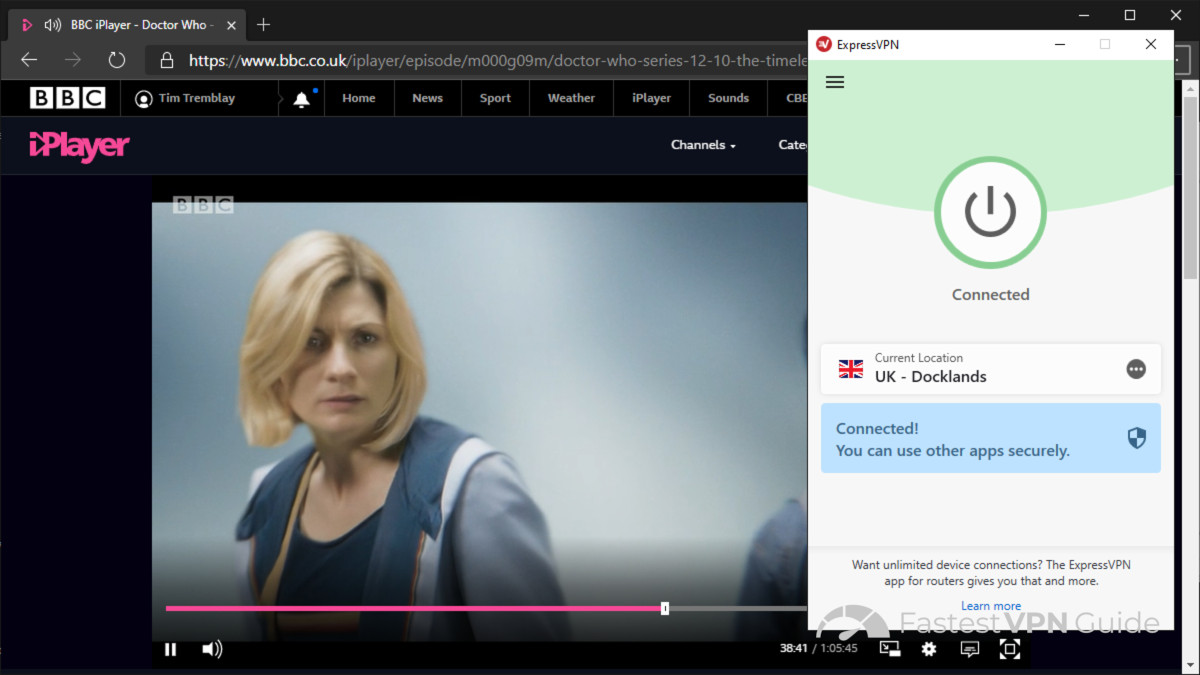 With over a hundred servers in four British cities, you always have plenty of connection options. And blazing server performance mean you can crank the video quality as high as you want without fear of buffering.

Outside the UK, ExpressVPN’s server list spans 95 countries. And their oh so intuitive app is a joy to use.

Customer support at ExpressVPN is the industry gold standard. You also get an excellent no-questions-asked 30-day money-back guarantee.

And while ExpressVPN is somewhat pricey compared to the competition, it still offers terrific value – especially if they’re running a sale (which happens several times throughout the year).

To watch the BBC iPlayer, you should have a UK TV license. That said, the system currently works on the honor system.

When you stream a show, the platform may first ask you if you have a license. 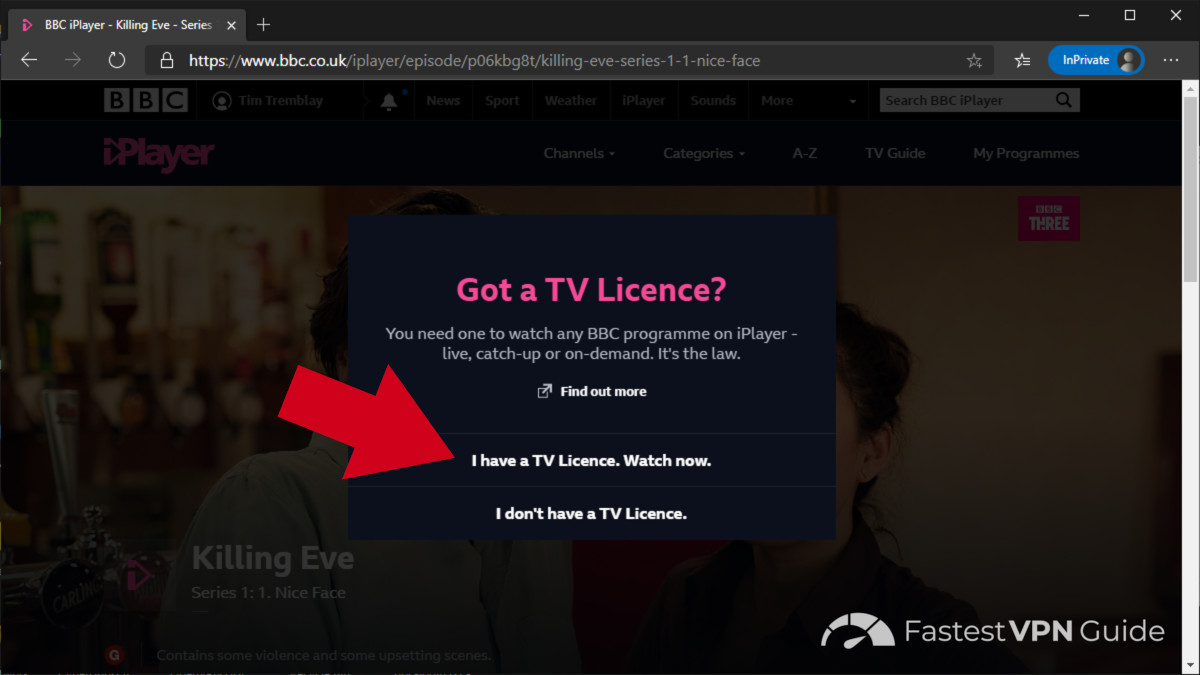 But when you click Yes, no further proof is requested. So, while you are technically breaking the rules by saying you have paid your license fee when you have not, there are no ramifications.

To access the iPlayer, you also need a free BBC account. Anyone can create one, and doing it is easy.

How to Register With the BBC in Australia

To create a free BBC account from Australia – a requirement for watching it online – follow these steps.

As per the BBC registration FAQ, the service uses the provided information only for anonymous statistics gathering and to help recommend programming.

Ideally, you should, of course, sign up using your real information.

But, if you’re worried about privacy, a fake birth date, throw-away email address (as long as you can access it once to validate the registration), and a random (but valid) postcode work.

Can You Watch BBC One in Australia?

Yes, you can watch BBC One in Australia by accessing the iPlayer through a VPN.

Why Doesn’t BBC iPlayer Work With All VPNs?

VPNs are a well-known tool for accessing geo-restricted content. As such, the BBC actively attempts to block their use.

Not every VPN provider has the resources, technical ability, or willingness to get around the BBC’s attempts. Those are the VPN services that never work.

The BBC can also sporadically block access for providers that should work (like the five mentioned above). If that’s a situation you’re running into, there is a simple BBC iPlayer VPN workaround process you can follow to fix the problem.

Why Does My BBC Stream Buffer With a VPN?

VPNs with slower performance may not be able to keep up with the amount of data sent due to how far it needs to travel from the UK to Australia. The result is frequent buffer and reduced visual quality.

The eliminate buffering and for the best video quality, using a fast VPN is key.

To watch BBC iPlayer in Australia, you only need a single thing – the right VPN. Choose a provider with plenty of UK servers, excellent performance, and, most importantly, the ability to bypass the BBC’s geoblocking technology.

When you do, anytime and anywhere access to iPlayer is yours. Enjoy the show!