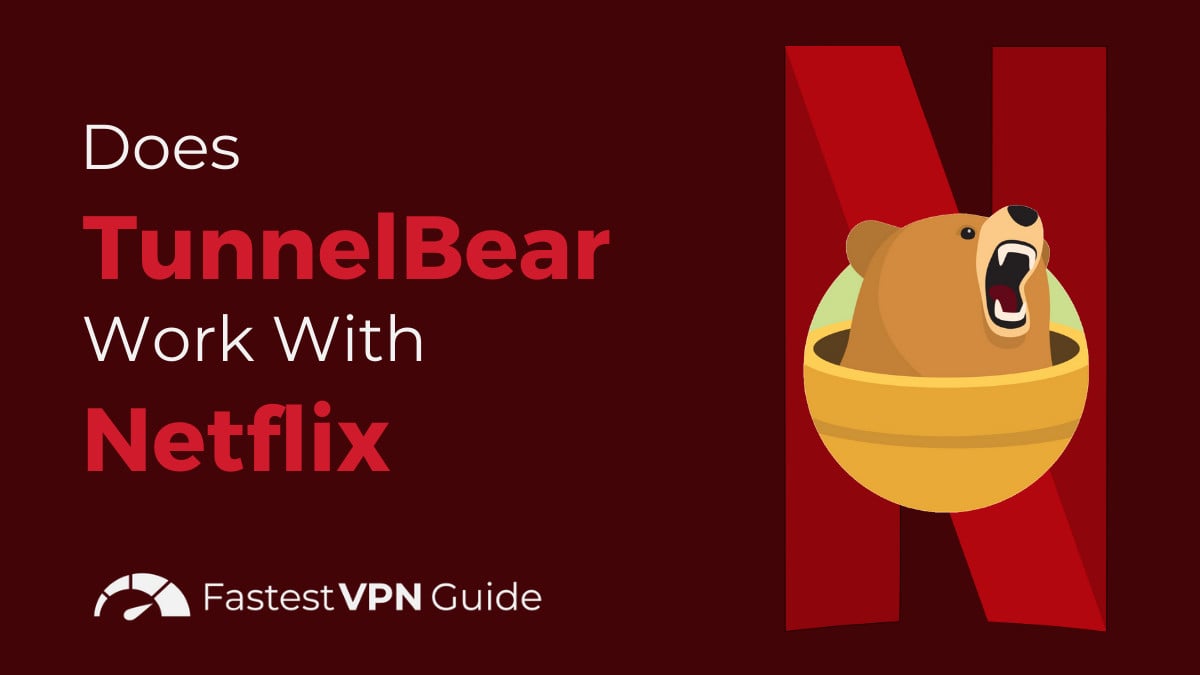 Getting access to every Netflix library across the world using a VPN was once a breeze. Then, that day in January 2016 happened – the day Netflix announced its war on VPNs.

Many providers nearly instantly stopped working with the streaming giant. Others tried to carry on but, over time, became less and less effective.

Sadly, TunnelBear (both the free and paid versions) falls into the latter category.

That said, not all hope is lost. There is a TunnelBear Netflix workaround that, sooner or later, should yield results. Though, if it’s reliable access what you’re after, there are other VPN services that do a much better job.

TunnelBear made its name for top-notch security in a sleek layout. It has everything most of us want in a VPN provider – no-fuss setup, easy navigation, reliable data protection, and very respectable server speeds.

The free version is actually free, functional, and secure, too.

Unfortunately, when it comes to streaming Netflix, TunnelBear just isn’t the best option.

From 2016 onwards, Netflix has been blacklisting every VPN IP address they can get their hands on. These days, VPNs need a lot of resources and a sizeable server network to stay one step ahead of Netflix’s efforts and churn out new IPs anytime they’re blocked.

And smaller, partially free VPN providers like TunnelBear have a tough time keeping up. That all said… 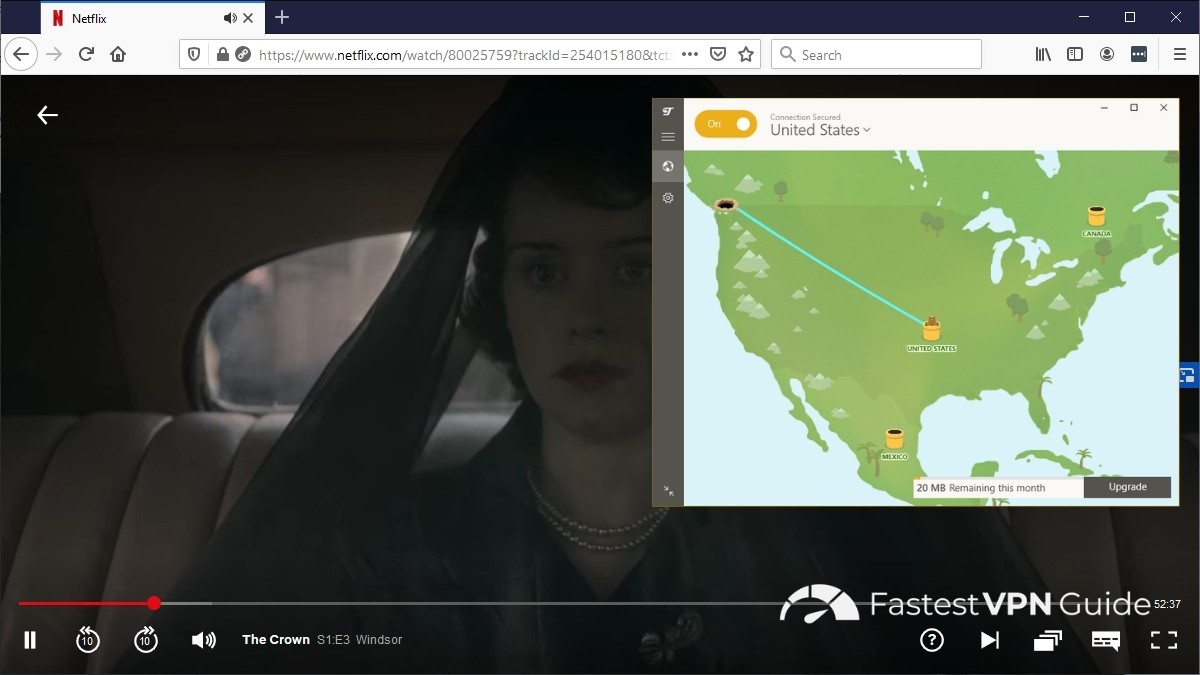 As you can see, TunnelBear hasn’t completely thrown in the towel against Netflix. It took me a lot of time to get it to work, but it is possible if you’re patient.

How to Unblock Netflix With TunnelBear

As we saw above, you can sometimes use TunnelBear for Netflix. Here is a quick step-by-step of how to get it up and running:

Sadly, most of us will see the infamous Netflix proxy error: “Whoops, something went wrong…” or “Pardon the interruption”. So, what do we do then?

TunnelBear Not Working With Netflix Workaround

As efficient as Netflix is at blacklisting VPN IP addresses, some do slip through the cracks. The trick is finding one that did. If you’re successful, just like that, TunnelBear and Netflix will be friends again.

Anytime you see the following screen, that server’s IP is already blacklisted by Netflix and won’t ever work with it again. 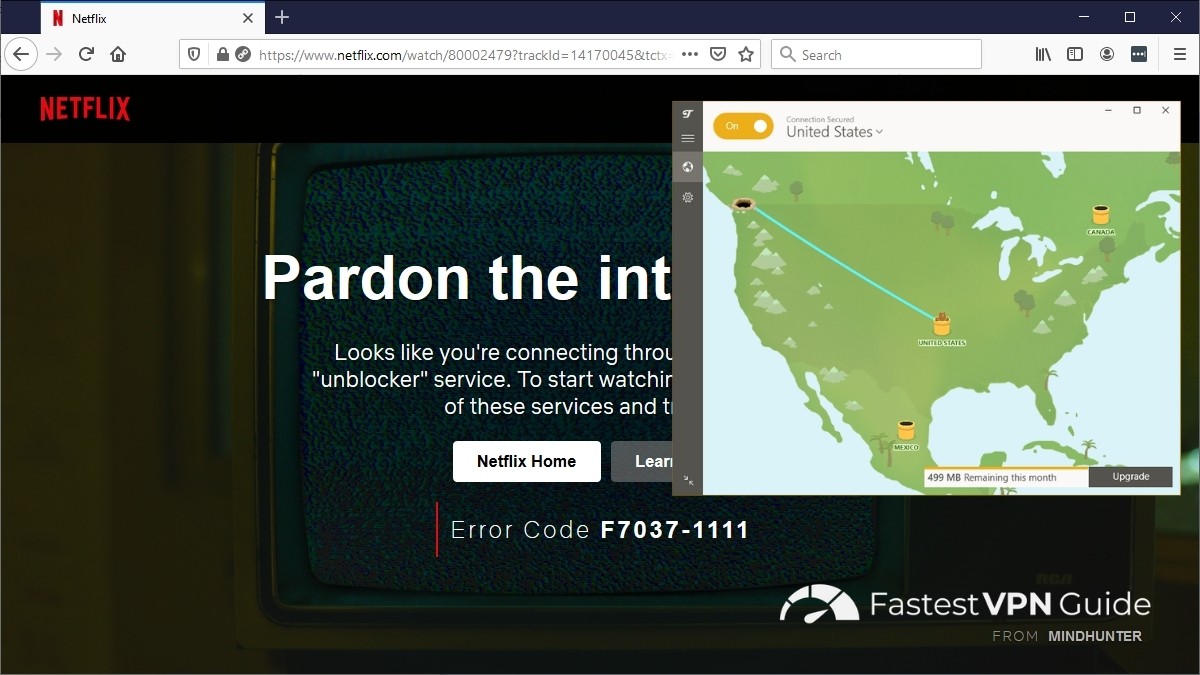 The only way around it is switching to another server which, theoretically, gives you a different IP address. Disconnecting and reconnecting to the VPN usually does that. And, if you’re lucky, the next server you get may be one that Netflix hasn’t yet blocked.

Unfortunately, with TunnelBear VPN, you can’t choose specific servers, only a location. So even though the provider runs multiple servers in a country, they won’t let you manually switch between them.

That means whether or not you get a new server (and a new IP) with each VPN connection attempt is completely random. If you’re unlucky, you may end up landing the same one over and over and over again.

That often makes using TunnelBear to access Netflix quite the chore. But, short of switching to a different provider (which I’ll go over a little further down), it’s the only workaround we have.

As mentioned above, TunnelBear doesn’t let you pick individual VPN servers, only a country. Hence (and unfortunately), there aren’t specific servers I can point you to that work with Netflix.

TunnelBear’s server list currently spans 48 countries. I ran tests on US Netflix and seven other most popular libraries in the world, and below is a table of how each location did.

I spent about ten minutes on each country, connecting and disconnecting until I either found a server that works or decided it was time to give up. Some worked much quicker than others, but overall, I got the impression most TunnelBear IPs are currently blacklisted by Netflix.

Because of the randomness of how servers are assigned, though, you may find a good one quicker (or slower) than me.

If you get to a point where disconnecting and reconnecting to TunnelBear becomes too frustrating, you do have other Netflix VPN options available.

My current go-to when accessing Netflix Japan or Netflix UK (which I spend more time watching than I should) is NordVPN.

With nearly 5600 servers in their network, you’ll easily find an IP not blacklisted by Netflix – more often than not on the first try.

On the off chance you are having issues, NordVPN lets you pick individual servers. That makes the reconnection process much less random and more pragmatic. If you prefer, you can also rely on the provider’s friendly 24/7 customer support to point you to a server that works.

Speeds are excellent and easily handle streaming in 4K for the shows that support it.

When you put it all together, NordVPN works with Netflix like no other. As a bonus, they’re also an excellent VPN service for unblocking most other streaming services, including Hulu, Disney+, Amazon Prime, and BBC iPlayer.

Add on top of that NordVPN’s 30-day money-back guarantee, and you have nothing to lose (except perhaps a few hours of sleep – I can never turn off Netflix either).

Can I Use Free VPNs for Netflix Instead of TunnelBear?

TunnelBear isn’t the only free VPN out there. So why not just choose another free provider?

Because, unfortunately, no free service reliably unblocks geo-restricted content. They all suffer from the same issues as TunnelBear and often even worst (i.e., zero working servers).

There are also other downsides to free VPN providers.

Most of them limit your bandwidth (e.g., TunnelBear’s 500MB restriction), and speeds are usually an issue due to server overcrowding. Not to mention your desired region might not be an option – for example, some VPN users may want to unblock Netflix Australia, but there aren’t any Australian servers.

Finally, many free VPNs just aren’t safe. According to one study:

VPN services like TunnelBear – ones that run a split free/pay model – tend to be okay. But beyond that, it’s definitely buyer beware (even though you’re not actually buying anything).

When a well-reviewed provider like NordVPN costs only a few dollars per month, going free is rarely worth it.

Does TunnelBear work with Netflix? Occasionally it does.

However, most TunnelBear IPs are blacklisted by the streaming service. You can’t choose your server, either, so you’ll have to randomly connect and disconnect to (maybe) find a good one.

TunnelBear is an excellent option for what it does – it’s just not great for unblocking Netflix. For that, there are much better choices out there. And currently, no other VPN works as well as NordVPN.