Skip to content
Home » VPN Guides » What Is an IP Address

An IP address, short for Internet Protocol address, is a string of numbers used to represent a network-connected device. Every smartphone, computer, router, smart TV, etc. using any type of network is identified by one.

The IP is what allows devices to send data to each other. It’s a marker that lets the routers, switches, and cabling that make up the internet (and any other computer network) know where each bit of data flowing through came from and where it’s going.

Just like your street address tells your friends, family, and the mailman how to find your house, IP addresses do the same for network connected devices.

A standard IP consists of four groups of digits in the 0 to 255 range. A period separates each group. Here’s an example:

If you got curious and pasted the above IP into your browser’s address bar, you should have landed on Google’s homepage. That’s because that IP is one of the many assigned to the servers used by Google to host their search engine – at least it is as I write this.

In other words, it’s the address at which Google’s search engine lives.

Now that you (hopefully) understand what an IP address is, let’s complicate things a bit. Did you know that some devices may end up with a different IP each time they connect to the internet?

The devices whose IPs don’t change are said to have a static IP address (also known as dedicated or fixed). Those that may get a different address with each connection have what’s called a dynamic IP.

The dynamic IPs doesn’t necessarily change every time. Sometimes it does indeed reset with every connection. Other times, though, only when a certain amount of time elapses. It’s all up to the configuration of the DHCP server, which is the router, modem or other network hardware that assigns the IP.

Static IPs are typically used for servers and public services (like the Google search engine example above) as it’s critical for users to be able to connect to them on demand.

When you type a website URL (like google.com) into your browser, your device consults a giant listing of IP addresses called a registrar. The registrar then tells your device the exact IP of the site you’re trying to reach.

It’s like looking up the phone number of a business in the yellow pages (for those of us who still remember those).

If the server hosting the site you’re trying to visit had an address that changed randomly, browsing the internet would quickly become impractical, if not impossible.

Dynamic IP addresses, on the other hand, are typically used for things like home internet connections or public Wi-Fi hotspots. Basically, anything that doesn’t provide a service to the rest of the world.

It doesn’t matter much to anyone if your smartphone changes IPs every few hours. As long as the hardware it’s talking to (like your home router) knows about the change and can still send data to the right place, everything’s fine.

It’s like moving to a new house and letting Amazon know to now send your packages elsewhere.

Reason for Dynamic and Static IPs

So why the two types of IPs? Simply because otherwise there wouldn’t be enough addresses to go around for every device connected to the internet.

After taking into account IP ranges that are reserved for very specific uses (like internal, non-internet computer networks), there are only 3,706,452,992 IP addresses available for the entire internet to use.

There are currently over 4.2 billion internet users in the world, many of who have multiple devices. So, a mere 3.7 billion IPs just don’t cut it. Hence, sharing through the use of dynamic assignment is an absolute must.

That is, until a whole new type of IP address, known as IPv6, becomes widely used.

Technically speaking, the IP addresses (of both the static and dynamic variety) we’ve been talking about so far are known as IPv4 addresses. They’re part of a standard that predates the internet itself. Back then, computer networks rarely existed outside of college campuses. 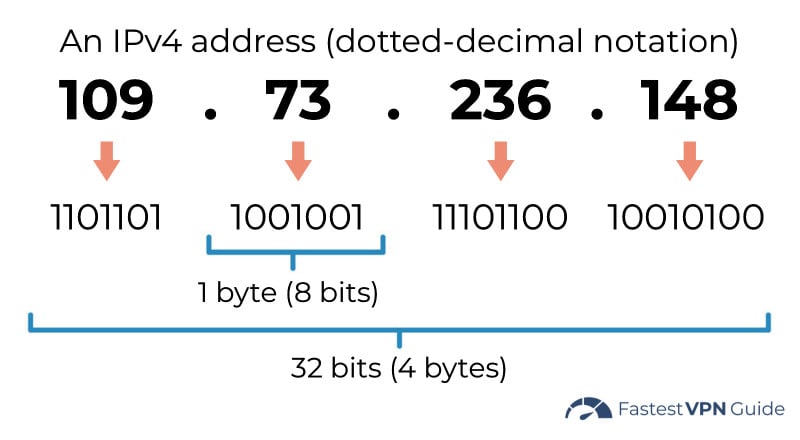 At the time, network designers never anticipated that the internet as we now know it would exist and grow as large as it has. It never occurred to them that the 4 billion or so public IPs made possible through the IPv4 standard wouldn’t be enough.

But, here we are. The available IPv4 addresses are exhausted.

So is it time to panic? Far from it. A new standard called IPv6 promises to solve the IP address shortage forever.

What Is an IPv6 Address?

IPv6, like its IPv4 predecessor, uses groups of digits to form unique combinations to represent a network connected device. There are, however, a few big differences: 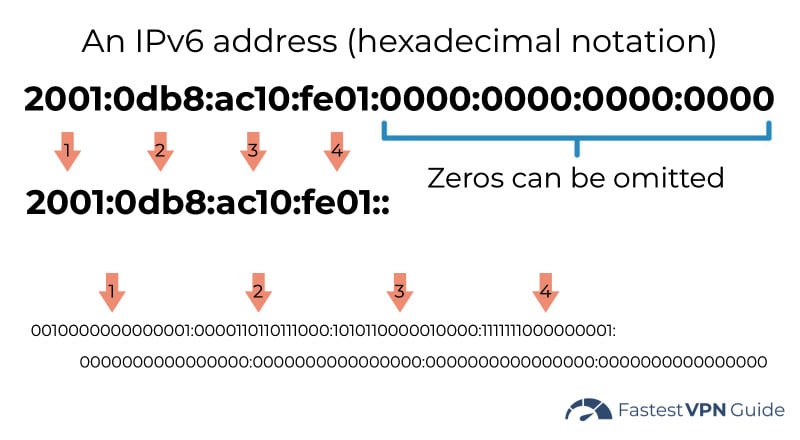 Colons separate the IPv6 address groups and leading zeros in each group are optionally removed (which means an entire group may not be shown if it contained nothing but zeros).

Here is an example of an IPv6 address:

In case you’re wondering, the IPv6 address above represents the same Google web server as the IPv4 address listed earlier.

If you paste this version into the address bar in your browser, however, you may not reach Google’s homepage. If your browser was unable to connect, it’s possible either the internet service provider (ISP) you’re using, or your own network hardware doesn’t yet support IPv6. You can confirm this by running this IPv6 test.

Eventually, IPv6 will replace IPv4. But don’t worry if yours isn’t yet working. You have time. Experts expect IPv4 to remain in use until at least 2040.

What Can You Get from an IP Address?

Your device’s assigned IP address can show plenty of information about you.

First and foremost, if you’re the account holder associated with the internet connection in use, your ISP can literally look up your name and house address from your IP.

Outsiders won’t be able to identify you to that degree (in a first pass at least). But, they can easily tie you together with the ISP you’re using, since ISPs use predefined hierarchical IP address ranges.

That is how police and law enforcement agencies track and find the parties responsible for online criminal activity. They look up the ISP associated with the offending IP and get the user’s information from them.

If someone has the proper resources, an IP address can be traced to an individual rather easily.

But even without law enforcement level resources, anyone can still pretty accurately narrow down your IP address to your location. For example, any website you visit will know within a few kilometers or miles where you are.

That’s because there are a number of free databases which list the approximate geographical areas of all known IPs. For home users, having dynamic addresses means that the information will be imprecise at best. But the datasets in use are improving all the time.

What Online Activities Can Be Traced to an IP

An IP address, like your home address, represents an endpoint. Any data traveling to or from your IP may be logged by whoever controls the networks it’s passing through.

All sites and online services you use also keep traffic logs. That means pretty much anything you do online is subject to tracking by someone, somewhere, and nearly at every step along the way.

With this much information out there, all online activity can quite easily be traced back to one single IP address. It’s a huge digital fingerprint.

It true that most of the time, logging is done for network diagnostic purposes. But that information is there, accessible, and usable. For example, ISPs selling user activity to advertisers (or anyone else who’s interested) is becoming fairly common.

Likewise, copyright holders aggressively monitor peer-to-peer file sharing and direct download services, collecting IPs accessing illegally posted content. If you’ve ever received a copyright warning from your ISP, it was the result of such activity monitoring.

How to Hide Your IP Address

You’re now familiar with what an IP is, how it works, and just how much information about your online activities it may reveal. As you can see, there are plenty of reasons to hide it.

How do you do that?

The answer is simple: use a VPN. Bang for buck, a VPN is the easiest and most effective way to conceal your IP and all online doings.

First, it creates an encrypted connection between your device and a VPN server located somewhere on the internet. That means nobody, not even your ISP, can monitor your traffic and find out what you’re doing. All they see is a bunch of encrypted gibberish.

Better still, when using a VPN, outsiders will not be able to see your real IP address. To them, all your traffic will appear to come from the server you’re using, not your device.

As long as you’re careful to select a VPN provider that keeps no logs (you can find a list here), it will be next to impossible for anyone to connect any of your online activity back to you. You’ll get to enjoy true anonymity and effectively shield your IP address from scrutiny.