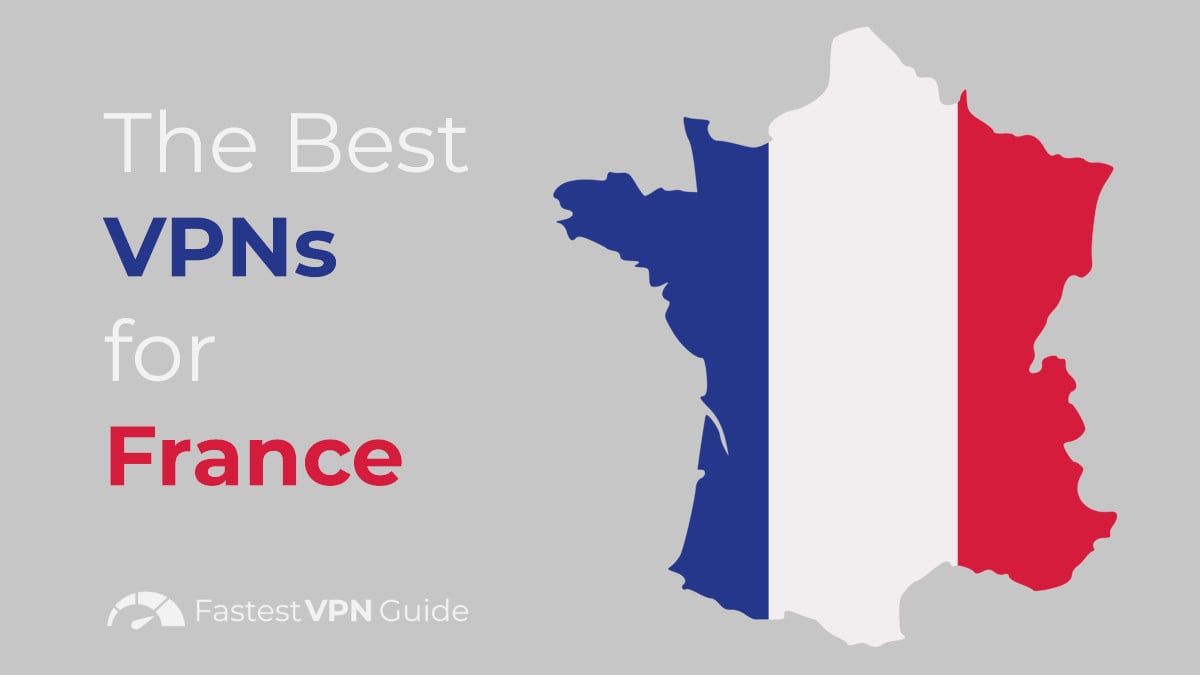 Maybe you’re in France trying to watch the BBC iPlayer, US Netflix, Hulu, or other international content without much luck.

Maybe you’re a bit concerned that under French laws, your internet privacy is far from guaranteed.

Or maybe still you’re outside the country trying to stream your favorite show from a local French channel but can’t.

In all those cases – and many more – a good quality VPN can help. And there are plenty to choose from too.

That said, each provider has its own unique set of features, benefits, and drawbacks, and getting the decision right is not always easy.

So, to that effect, here is a guide to help you choose the best VPN for France.

The Best VPNs for France Overview

Before digging in, let’s take a peek at the top VPNs for France. A quick summary may be all you’re looking for, and fair enough.

Why Use a VPN in France

There are plenty of good reasons for using a VPN in France, and not all are obvious. While I briefly mentioned a few of these already, here’s the exhaustive list.

Are VPNs Legal in France?

With such thorough surveillance laws in place, it’s not a stretch to imagine France banning VPN services. Thankfully, they have done no such thing.

VPNs are legal in France.

As a French citizen, resident, or visitor, you are free to use VPNs whenever and however you want. That said, you shouldn’t use them to do anything illegal.

Using a VPN to prevent someone from reading your email is perfectly fine. However, using one to coordinate any form of illegal activity is not.

A VPN does not absolve you from otherwise breaking the law.

In other words, using a VPN in France is legal, but don’t do with it anything you shouldn’t.

What to Look for in a VPN for France

Not all VPNs are a good choice for France. To maximize your chances of finding one that is, here are several features to look for.

As an aside, any provider I suggest here as a good VPN choice for France checks all of the above boxes. I encourage you to do your own research, of course, but you can also use one of my tried and tested picks as a good starting point.

The Best VPNs for France

Though you now know what to look for in a VPN for France, I’ve also gone ahead and did some of the legwork for you. Here’s a roundup of what I believe are the best VPN providers for France.

In the world of VPNs, few companies are as well-known and respected as NordVPN.

They operate a massive server network that consists of 5418 servers in 60 countries, with 265 servers in France alone.

The company operates out of Panama, which is among the best privacy jurisdictions in the world. NordVPN is also a no-logging provider, a claim they back up with a comprehensive third-party audit.

In terms of security, NordVPN is top-notch. Besides excellent protocol and encryption standard pairings, they also provide useful privacy features like a double VPN and the ability to combine VPN and the Tor network.

NordVPN is, without a doubt, one of the best VPNs for France. It comes with reliability, infrastructure, incredible server speeds, and quality that few other providers can match. Did I also mention NordVPN unblocks Netflix and just about any other geo-blocked content you can throw its way?

If you do decide to give NordVPN a try – you won’t regret it – you have a 30-day money-back guarantee backing you up. And be sure to use one of their coupons too for some extra savings.

One of my personal favorites, Surfshark is another excellent VPN pick for France.

They have an impressive server list that features just over 3200 servers in 96 countries (including, of course, France). And speed is as good as it gets across the board.

Surfshark, who is a zero log VPN, operates out of the British Virgin Islands. Despite the name, the jurisdiction isn’t subject to the surveillance of the UK or its allies.

The clean and intuitive client comes packed with features. It includes things like an ad and malware blocker, a double VPN setup, and split tunneling. As I cover in my Surfshark review, that’s barely scratching the surface too.

The service works very well with geo-blocked content, and you’re even allowed an unlimited number of simultaneous connections – something no other top-tier VPN provider does.

Oh, and one more thing other top-tier VPNs cannot match is Surfshark’s price. It’s the least expensive provider on this list and, arguably, the best value around.

CyberGhost is a service that checks all of the boxes for use in and outside of France.

It boasts a large server list of nearly 9800 servers in 90 countries. Among those, 962 are in France. That makes for one of the biggest networks among all providers. And it’s a fast network too.

CyberGhost is a no log VPN and the company’s headquartered in Romania – an excellent jurisdiction for data privacy. Not only is Romania not subject to EU or Eyes-alliance surveillance, but it has a reputation for non-compliance with external user data requests.

In terms of features, CyberGhost offers top of the line encryption and security, works very well for P2P, and unlocks US Netflix and other major streaming sites like BBC’s iPlayer, Hulu, and MYTF1.

It’s also an inexpensive service that comes with an industry-leading 45-day money-back guarantee.

The bottom line is, CyberGhost is a perfect VPN for France.

ExpressVPN is another excellent option for VPN users both both in France and abroad.

The company runs a good-sized network of 3000+ servers in 94 countries.

While they have a relatively small footprint in France of just 5 servers, the quality of that hardware is among the best in the industry.

Headquartered in the British Virgin Islands – a jurisdiction with plenty of privacy benefits – ExpressVPN has a strict no-logging policy.

The app is refined and easy to use, but still feature-packed. Advanced functionality like a kill switch, encryption and protocol settings, and split tunneling is all there, but neatly tucked away for when and if you need it.

ExpressVPN also excels at unblocking French and international geo-restricted content and, thanks to excellent server speeds, is a great choice for file sharing.

The customer support is second to none too.

Even though ExpressVPN is a bit on the expensive side – though a lot cheaper if you take advantage of their sales – the service is worth every penny.

PureVPN is next on the list of the best VPNs to use for France.

Other than their uncanny ability to unblock streaming services, PureVPN’s big claim to fame is their server network – it spreads across 93 locations in 93 countries.

A total of 24 of the servers are inside France, split up among one locations.

These numbers give PureVPN an unparalleled global reach and a large presence on French soil. And let’s not forget server performance either, which is among the best you can get.

Based out of a privacy-friendly location, PureVPN is an independently verified no log provider. They also use state of the art encryption and includes both a split-tunneling and kill switch features.

Their client comes with broad device support and can be used on over 50 different platforms.

PureVPN is very affordable, and with a 31-day money-back guarantee, you get plenty of time to test it all out.

How to Get a French VPN

You now know how to find a good VPN for France, as well as have several recommendations you can consider.

Here are the easy steps to follow to get your French VPN up and running.

How to Get the Best VPN Speeds in France

To get the best possible connection speed when using a VPN in France, connect to a server that’s as close to you geographically as possible. That will minimize the distance your data needs to travel and reduce the odds of running into poor network conditions.

For example, if you want to use a VPN for a bit of extra privacy and are just outside of Paris, picking a French server in Paris is ideal. Don’t connect to, say, Iceland.

And if you’re trying to stream American Netflix from France, pick a server on the east coast of the US. Connecting to Los Angeles will unnecessarily add several thousand kilometers to your data’s journey.

That said, you should realize that even under ideal conditions, a VPN will still slow down your internet connection. It shouldn’t be by much, but you’ll never reach the same speeds as over your regular connection.

If you’re picking a close server and find performance unreasonably slow – which can happen – here are several things to try to increase your VPN speed.

A VPN also can’t fix any pre-existing internet connection or speed issues – unless they’re due to ISP throttling or other similar restrictions.

Using a Free VPN for France

You may be tempted to try out one of the many services that offer free VPN access in France. After all, most providers – and indeed every one I list on this page – cost money.

I strongly advise you against it.

Using a so-called “free French VPN” is almost always a risky move. Many are riddled with privacy and security issues. Others resort to sketchy practices like ad injection and selling your data to third-parties.

Honestly, you’re better off trusting your French ISP and the government surveillance you’re trying to avoid in the first place – at least then your internet connection would be somewhat safe and fast.

There are plenty of reasons to use a VPN in France. You may want protection against draconian data collection and surveillance or to keep copyright trolls from causing you legal headaches.

Or you may just want to unblock and enjoy content restricted to a different country.

Whatever your reason, you now know what to look for in a VPN for France. And you even have a list of top providers to use as a starting point – most of which offer great discounts too.

So, don’t delay. Get the online freedom and privacy we all deserve. Start using a VPN.