Skip to content
Home » VPN Guides » What Is a Double VPN

If you spend any amount of time in the world of VPNs, you’ll likely come across a feature called double VPN. It’s not functionality many providers offer. But those that do make sure to advertise it front and center. They certainly make it feel like it’s something you should care about.

So what is a double VPN? And is it really as important as we’re led to believe? To answer those questions, let’s take a more detailed look at this functionality, including how it works, and how you may (or may not) benefit from using it.

How a Double VPN Works

As the name hints at, a double VPN (also sometimes called a multihop VPN) routes your data via not one but two VPN servers as it travels between your device and the internet. Increasing your security to the highest of levels and preventing unauthorized surveillance are its main goals.

With this feature enabled, everything you send and receive over the VPN connection is encrypted twice, with each encryption pass initiated at a separate point along the way. The data source IP address is also modified two times.

The points at which these things happen are in completely different geographical locations, and may even be in different countries.

When you use a double VPN, here is what happens to your uploads and downloads behind the scenes.

To start off (and as it normally does), your device encrypts your data and sends it to the first VPN server in the chain. That server does what VPN servers usually do. It swaps out your IP address for its own and decrypts the data.

But, instead of forwarding your information right away to its ultimate destination, the first server encrypts it a second time. It then sends the re-encrypted data to a second VPN server.

That second server also does what VPN servers do. It undoes the encryption and replaces the source IP address (which is now that of the first VPN server) with its own.

Only at this point is the data forwarded to its final destination (say, a website you’re viewing). 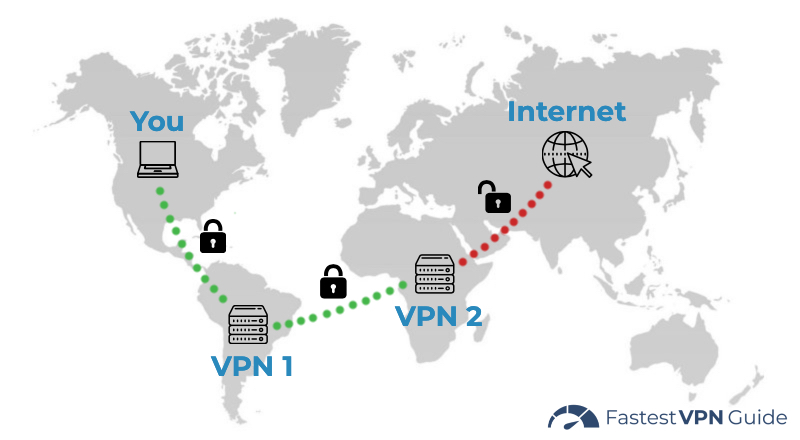 Combined, these two things take your internet security and privacy to a much higher level.

It’s that extra level of anonymity which is the true goal of a double VPN. And, while it certainly has benefits, using it also comes at a price.

Advantages of a Double VPN

A double VPN offers a kind of online privacy that would be difficult to get in any other way. When you use one, it makes it next to impossible for anyone to trace specific activity back to you.

The most significant benefit of a double VPN is that the second VPN server in the chain never sees your real IP address. The first server makes sure of that. This hides your identity behind a yet one more strong layer of protection.

Your ISP will also be kept in the dark about where your data is ultimately going. As far as it’s concerned, the destination is the second VPN server. The ISP has zero visibility into what happens beyond that point.

With a double VPN, you’re also bouncing your data between completely different geographical locations (maybe even different continents). This throws off even further any potential activity tracking at either end of the connection.

Let’s say you’re in Asia, connecting to a VPN server in the US through a second server located in Africa.

Combined with the double IP switch, that’s a big disconnect. If someone wants to piece back together what’s actually happening, to them, I say good luck.

Disadvantages of a Double VPN

At this point, you’d be right to conclude that a multihop VPN is an excellent tool for anyone truly worried about online privacy. That doesn’t mean, however, everyone should blindly jump on this feature. There is one big drawback which may make you think twice about using it.

If you’ve ever used a VPN, you likely know that to do so, you have to sacrifice some speed. Even the fastest providers can’t help you avoid that.

The speed penalty comes from many sources. There’s the extra distance your data needs to travel to the VPN server (instead of b-lining it to its final destination) and additional network congestion slowdowns along the way.

There’s potential congestion on the VPN server itself if many of us use it at the same time. There is also the overhead of the encryption and decryption process.

When you double up on the number of VPN servers, all of these potential bottlenecks can double as well.

Just to give you an idea of what the performance difference may look like, here is a speed test of NordVPN’s Amsterdam server using a single VPN connection. 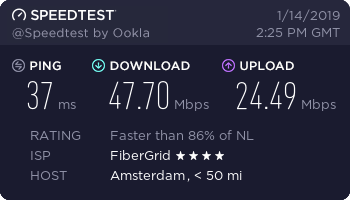 Here is a test of the same server with the NordVPN double VPN feature enabled and connecting through Sweden. 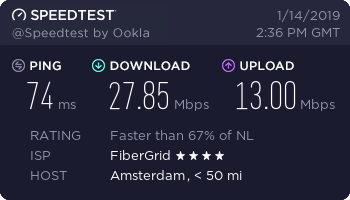 Even if you manage to make your VPN faster in every other regards, at the very least, your data still needs to travel to two servers before reaching its final destination. There’s just no avoiding the extra time it takes to do so.

That said, if you have a reasonably quick regular internet connection (on the order of 30 Mbps or higher), you’ll likely be fine.

But, if your internet connection is not the quickest to start with, the extra hit in performance makes double VPNs poorly suited for any online activity which requires speed and low latency. Think downloading large files, streaming video, playing games, or using a VoIP service.

Poorly suited doesn’t, of course, mean impossible to use. It just means expect a subpar experience. And for some of us, that may be a necessary trade-off.

When to Use a Double VPN

Now that you know what a multihop VPN is, and the advantages and disadvantages of using one, when would you actually want to use it?

Some argue functionality like this the next evolution in personal data privacy and security. Others insist it’s overkill. The reality lies somewhere in between.

From a security point of view, double-encrypting data is probably unnecessary. A brute force attack would take about 1 billion billion years to crack 128-bit encryption (the double billion is not a typo).

So, even data passing through a basic single VPN connection is next to impossible to compromise. By using double encryption, you’re hit with additional speed penalties for a security upgrade that’s entirely theoretical.

If your objective is to increase your anonymity on the internet, however, a double VPN may be worth it.

Routing your data through two VPN servers drastically decreases the likelihood of anyone connecting it back to you. If you’re in a situation where complete anonymity trumps all other concerns, the advantages far outweigh the disadvantage.

There is currently only a handful of providers that offer double VPN functionality. But, they also just happen to be some of the best overall options out there. Of the bunch, NordVPN and Surfshark are my personal favorites.

ProtonVPN is another excellent option. It’s also the only service to offer double VPN connections on their entire network (which currently consists of 1724 servers in 95 locations and 67 countries).

All three providers are zero log VPNs – and that’s key. If a VPN keeps a log, it becomes much easier to trace online activity back to its source, double VPN or not. Someone would still have to get their hands on those logs, of course, which is not easy. But, why take that chance. No log, no potential problem.

The three VPNs are also all based out of privacy-friendly countries. That means no data retention laws, no government surveillance, and no internet censorship. Another important privacy checkbox ticked.

Finally, all three providers offer multihop VPN connectivity at no additional cost (which is not always the case). Routing data through multiple servers chews up more resources, and some VPNs like to pass those costs on to us, the users.

If you do end up using one of these services, there is one thing to note. Single VPN mode is the default for all of them. You’ll need to enable double VPN functionality at connection time explicitly.

As double VPN becomes more popular and available from more providers (which is the current trend), there’s a chance we may find ways to decrease the associated speed issues. Until then, this feature does come with an extra connection performance hit.

However, for those of us who are hyper-conscious about our online privacy or concerned about staying anonymous on the internet, a double VPN is the perfect tool.

2 thoughts on “What Is a Double VPN”