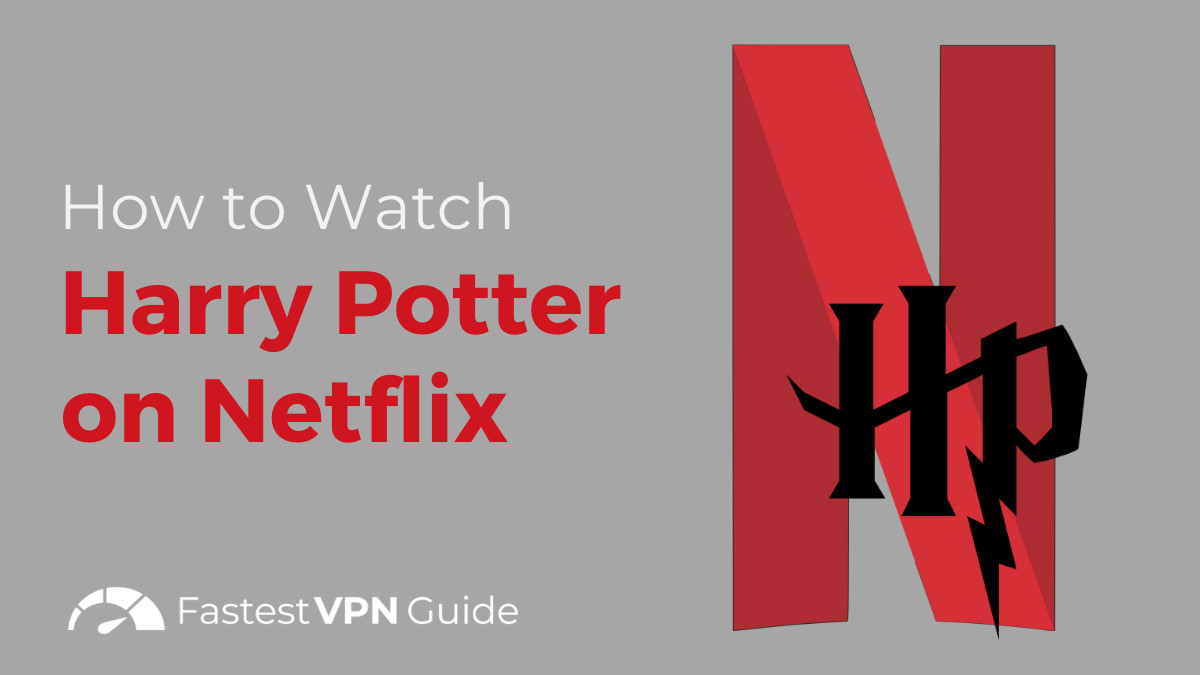 Can you watch Harry Potter on Netflix?

Well, that depends on how lucky you are. And these days, you have to be very lucky. Why? Because the Harry Potter movies are only available to stream from a single local Netflix library in the world – Turkey.

If you’re in the US, UK, Canada, Australia, or anywhere else, you can’t access the franchise directly. And, unfortunately, it won’t be officially coming to Netflix anytime soon either.

That said, not all is lost. There is an easy way to stream Harry Potter no matter where you are.

And in this article, I’ll show you exactly how to do that. I’ll let you in on the secret of how to watch the Harry Potter movies on Netflix from any country – even if they’re not available to you locally.

How to Watch Harry Potter on Netflix?

If you are in Turkey, just fire up Netflix and enjoy. But odds are, just like me, you are not.

In that case, what you need is a Virtual Private Network (VPN).

Typically, we can only access our local Netflix libraries. If you’re located in America, Netflix US is what you get. In Australia, it’s, well… Netflix Australia.

Among many other useful things they do, Netflix VPNs trick the streaming platform into thinking you’re physically located elsewhere. They do so by changing your device’s IP address. So, you can be in New Zealand and, with a VPN, easily look like a Spanish user (or vice-versa).

Being able to fool Netflix this way lets you load a foreign library with Harry Potter – like the one in Turkey – even if you’re not in the country. (And don’t worry; the videos and captions are still in English.)

Here’s a summary of how to use a VPN to unblock the Harry Potter films on Netflix:

There is one catch to the above – not all VPNs are Netflix-friendly. Some won’t play the content at all. Others lag horribly.

So, let’s take a look at how to pick a genuinely good one.

VPNs are hands down the easiest way to watch Netflix from other countries. However, not every provider can unblock geographically restricted content.

And, even if they do, you have to mind the speed. All VPNs slow down your internet connection a little. But the good ones keep that slowdown to a minimum.

Choose the wrong provider and forever suffer from video player pixelation and constant buffering. Perhaps that sounds a bit dramatic, but it is true.

In other words, to choose the best VPN to watch Harry Potter, make sure that:

With that said, here are my VPN picks – tried, tested, and proven to unblock the Harry Potter movies.

With zero doubt, NordVPN is my top recommendation. It’s the provider I use daily and couldn’t be happier with.

NordVPN works with Netflix like no other, unblocking any regional library you throw at it. Speed-wise, they’re also a force to be reckoned with. 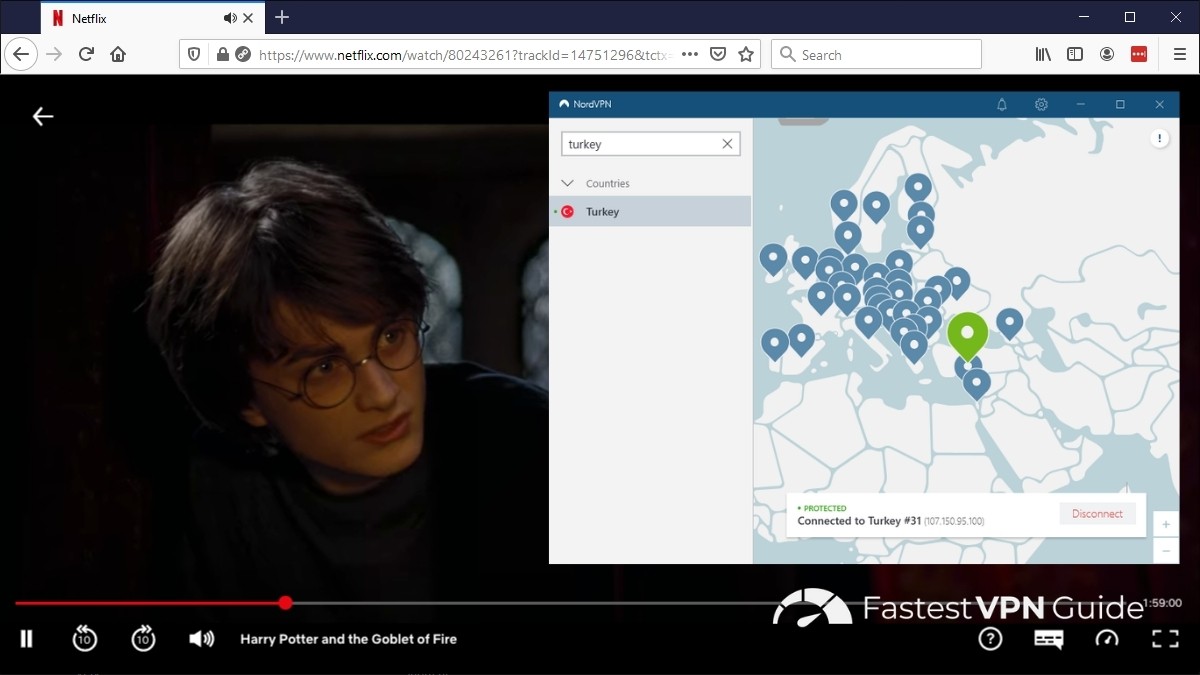 NordVPN, of course, run servers in Turkey so you can stream Harry Potter. But their 5514 strong network covers 59 other countries, too, meaning you can easily access Netflix from anywhere (or any other streaming service, for that matter).

Beyond NordVPN’s streaming prowess, the provider is an excellent choice for maximizing your online privacy, anonymity, and security. A strict zero-logging policy, excellent encryption standards, and many privacy-related features make sure of that.

Add to it all NordVPN’s 30-day money-back guarantee (which you can effectively treat as a month-long free trial), and you have nothing to lose and a lot to gain by giving them a try.

Surfshark, another one of my VPN favorites, is also an excellent choice to watch Harry Potter on Netflix. 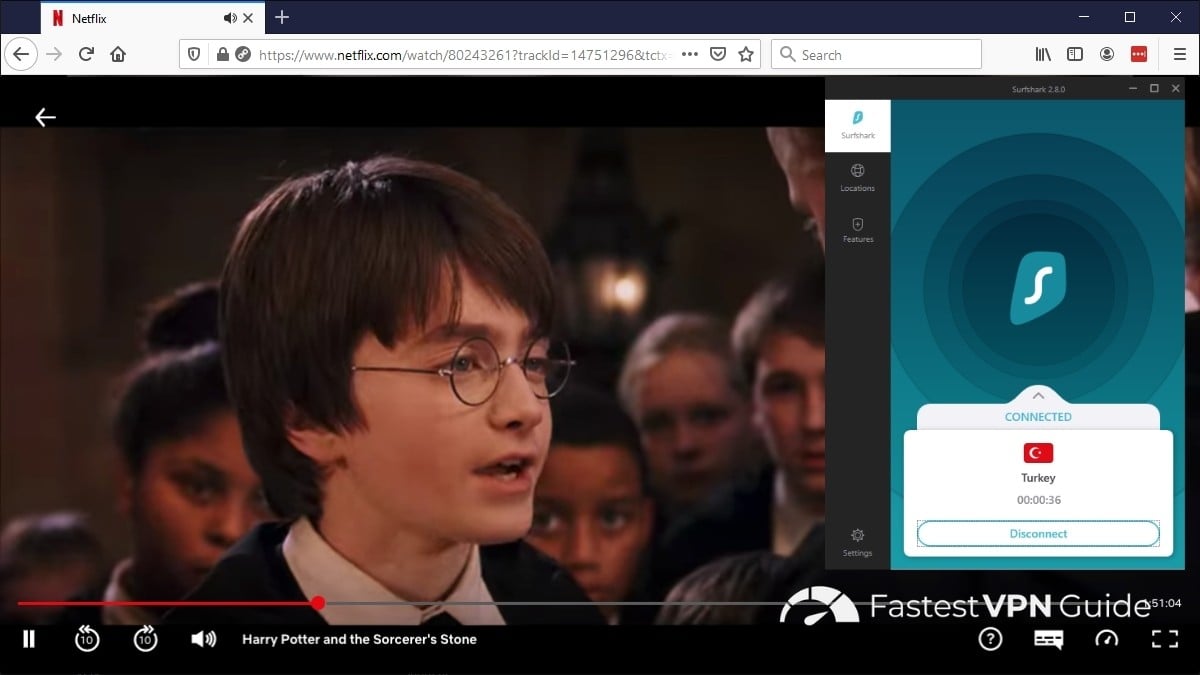 While the provider is still a bit of a new kid on the block, their performance, ability to access regionally locked content, and affordability is up there with the best of them.

With several servers in Turkey, the Harry Potter films are always at your fingertips. But, Surfshark’s expansive server network means access to other Netflix libraries is just as easy.

Server speeds are as good as they get, too – no buffering here.

Something else that makes Surfshark stand out is their unlimited simultaneous connections policy. That means everyone in your family can stream on their own devices without accidentally kicking others off the network.

Combine it all with Surfshark’s low, low prices, and you have a top-shelf, budget-friendly provider that checks all the boxes.

As the cliché goes, last but not least, is CyberGhost. They’re another great VPN worthy of your consideration for Harry Potter Netflix access. 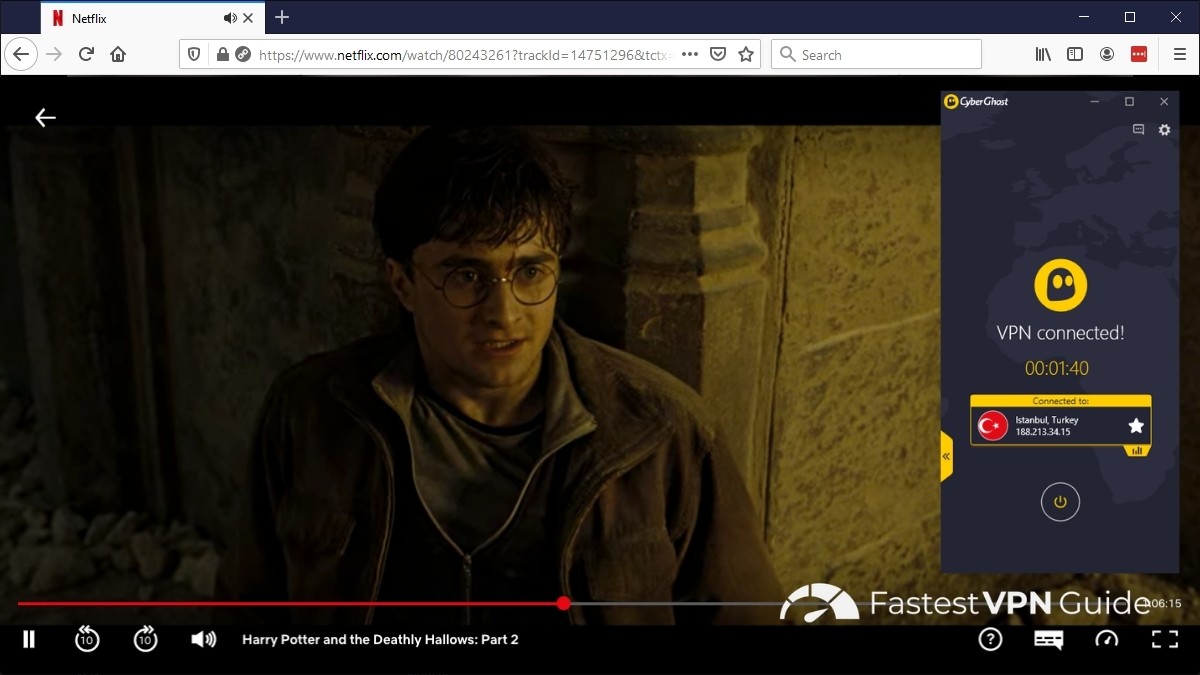 The company has improved its service by leaps and bounds over the last few years and is now one of the top-rated providers in the market.

CyberGhost promotes itself as a streamer’s VPN and does indeed deliver. Speeds are excellent, and the provider is well-known for its ability to unblock Netflix (as well as a ton of other streaming services).

With CyberGhost, you get up to seven connections at once and the most generous money-back guarantee in the industry – you have a full 45 days to decide if they’re the right VPN service for you (a strong show of the company’s confidence in their product).

As I mentioned earlier, not all VPNs can unblock Netflix. To understand why let’s rewind a few years.

In 2016, Netflix started blocking virtual private network traffic from accessing their platform. They did this to comply with the company’s various content licensing agreements.

Since then, anytime Netflix servers detect a VPN or proxy IP connection, they show an error message and tell us not to use it.

Despite Netflix’s new stance on VPNs, there, of course, continued to be demand for using them with the streaming service. So, many providers decided to carry on.

Unfortunately, with Netflix now roaming the internet looking for and blocking any VPN or proxy IP they can get their hands on, staying one step ahead of those efforts became expensive.

Not only do providers have to detect when their server IPs are banned. They also need a consistent pool of fresh ones to replace those that no longer work.

Not all VPNs can afford this.

So, some providers simply threw in the towel. They found different selling points for their service – for example, privacy or data security – and moved on. And today, only a handful continue to reliably unblock Netflix and let us watch the Harry Potter films.

NordVPN, Surfshark, and CyberGhost – all mentioned above – fall within this category.

They say point-blank that you can use them for streaming services. And, more importantly, they deliver on their promises (not all VPNs do). These are the types of providers you’re looking for.

Free providers can work, but very, very rarely. Remember how Netflix blocks VPN traffic? And how it’s expensive to detect blocked server IPs and replace them?

Free VPNs are the lowest tier, cheapest option there is. That pretty much guarantees they simply can’t afford to unblock Netflix.

They lack the funds, infrastructure, and – because of the cost – motivation to keep churning out new IPs. Occasionally, you’ll get lucky and may find a free service that works for a bit. More often than not, though, Netflix will show you the door.

Besides, free VPNs limit your bandwidth, and they’re notoriously slow.

With a typical monthly bandwidth allowance, you would probably get half-way through Harry Potter and the Sorcerer’s Stone on Netflix before running out of data (and don’t even think about watching a second Harry Potter movie).

With affordable, high-quality VPNs like Surfshark in the market, trying to save a couple of dollars per month for a lot of potential frustration is just not worth it.

Why Is Harry Potter Not on Netflix?

Because Netflix hasn’t paid for it.

Netflix doesn’t own the Harry Potter movies – Warner Brothers does. So, to put Harry Potter in your local streaming library, Netflix has to go to the content owners and bid for the rights.

And licensing is territorial.

This means Warner Brothers is free to sell Harry Potter to Netflix in Turkey, and a Netflix competitor like Peacock in the US. And – you guessed it – this is precisely what they did. The movies are available in Turkey but nowhere else.

So, in other words, you don’t get Harry Potter on Netflix because someone else has outbid them for the regional rights.

In What Countries Is Harry Potter on Netflix?

Currently, the only country where you can access the Harry Potter movies on Netflix is Turkey.

As recently as a few months ago, the films were available in the Czech Republic, Hungary, Spain, and partially in Canada (parts 5 through 7). That, however, is no longer the case.

Is It Legal to Use a VPN to Watch Netflix?

Yes, watching Netflix over a VPN is legal. Territorial licensing is an agreement between Netflix and content owners. It’s not your responsibility to uphold it.

As long as VPNs are legal where you are, it’s perfectly fine to use them with Netflix. And, yes, VPNs are allowed in the US and all other Western countries. Only a handful of regions in the world (usually run by totalitarian regimes) frown upon them.

VPNs are simple to use, privacy-friendly, and (most importantly) unlock geo-restricted content, no matter where you are in the world. And they’re the tool to use if you want to watch any of the Harry Potter movies on Netflix.

The catch is, Netflix isn’t fond of VPNs and tries to block them. To stream reliably, you need a provider that actively works to sidestep Netflix’s efforts.

For this purpose, I use NordVPN (though, as we saw, there are other options, too). They’re fast, user-friendly, and won’t let you down come movie night. Try them for 30-days completely risk-free, and see what you think. You won’t be disappointed.

Now, if you’ll excuse me, for the umpteenth time, it’s Harry Potter and the Goblet of Fire on Netflix time.