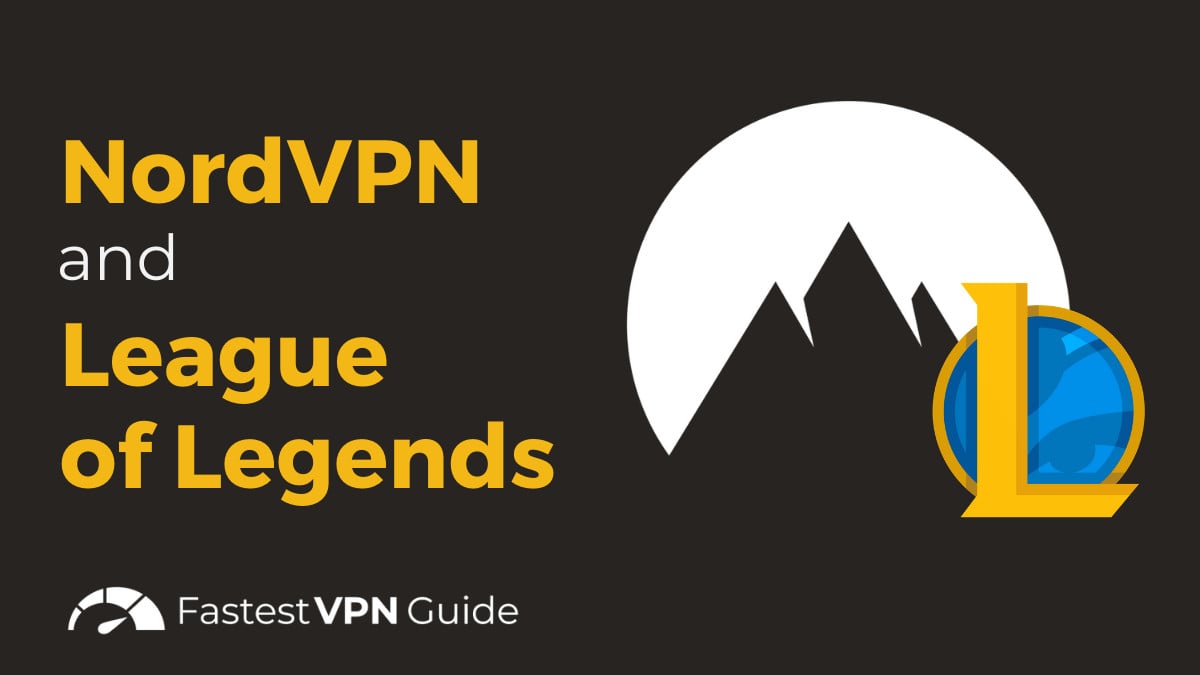 No one can argue the popularity of League of Legends – the numbers speak for themselves. Show me another game with a monthly player count of 115 million and upwards of 50 million players online each day.

Just because LoL is popular doesn’t mean battling for supremacy on a Field of Justice is always a trouble-free experience.

DDoS attacks, internet service provider (ISP) bandwidth throttling, difficulty logging onto gaming servers, network restrictions – these are just some of the issues we may run into.

Using a VPN to connect to the game can help with these problems (as a bonus, it will also let you access game servers outside your region – one of the list of cool thing you can do with a vpn).

And no VPN provider does a better job of it than NordVPN. They are one of the best VPNs for League of Legends.

In this article, I’ll cover everything you need to know about playing League of Legends with NordVPN and how it can improve your gaming experience.

Can You Play LoL With NordVPN?

Let’s first address what most will consider the elephant in the room. Is playing League of Legends with NordVPN possible (or allowed)? The short answer to both is yes, yes it is.

That said, there are two common concerns about doing it. Let’s dig deeper into those now.

Many of us worry that since using a VPN changes our IP address, Riot Games may see it as account sharing.

Sharing LoL accounts is against the rules because:

In fact, Riot considers account sharing a serious enough problem to make it a permaban offense.

So, would using NordVPN get you in trouble? Not really.

We all have our unique game style, preferred champion, etc. When you play over a VPN, other than the IP address, everything else still points to the player being you.

If you’re really worried about being accused of sharing an account when using a VPN, contact Riot’s support team ahead of time. Tell them you’ll be using one.

With the interaction logged, even if you run into a problem later on, you’ll be able to dispute and fix it easily.

The other common concern about using VPNs with LoL is speed. Will the connection speeds be fast enough for a decent gaming experience?

Again, the answer is yes.

VPNs encrypt your traffic, which does slow down the connection a bit. However, most top-tier providers have performance well in hand and continually optimize, upgrade, and expand their server network.

So, when using the right VPN, any hits to performance will be negligible. And NordVPN might even speed up your connection – more on that later!

Why Use a VPN for League of Legends

So, you can use NordVPN for League of Legends. And why would you want to?

Here are the main perks:

Many League of Legends server connection problems can be caused by your internet service provider and bandwidth throttling.

Online gaming can use a ton of data. Because of this, some ISPs knowingly throttle and slow down your connection. They say it’s to prevent network congestion, though ultimately, who knows. They’re rarely open about the practice, too.

Using a VPN stops ISP throttling. VPNs encrypt your traffic, which hides your online activities from the ISP. When the ISP can’t tell what you’re doing, they won’t throttle you.

And with full bandwidth at your disposal, many LoL connectivity issues disappear.

The competition on League of Legends can be pretty cutthroat. So much that distributed denial-of-service (DDoS) attacks are an issue.

A DDoS attack cripples your internet connection. It may significantly reduce your bandwidth and increase latency – both of which will make you much less competitive (assuming you’ll be able to play at all).

To pull off a DDoS attack, the other player needs your IP address. Using a VPN makes getting it impossible – your IP is hidden and replaced by that of the VPN server.

So, can’t the attacker just DDoS that VPN server? Yes, they can. But with a provider like NordVPN, they won’t get very far.

NordVPN takes privacy and security very seriously and runs sophisticated DDoS protection systems on all their servers. When you play League of Legends connected to one, you don’t have to worry about DDoS or any other malicious attempts to weaken your game, steal your information, or spy on you.

Use Any LoL Game Server You Want

Are you going on vacation but will still want to play League of Legends on your local server? Do you want to play with friends in other countries? Or maybe you’re just looking to test your skills against players on new continents?

With a VPN, you can play any LoL server you want.

When you connect to a VPN, your traffic reaches the internet at large only after it passes through a VPN server. At that point, everyone thinks the server’s location is your location – including Riot.

In other words, connect to one of NordVPN’s Australian servers, and you’ll end up on the League of Legends OCE server. Choose a VPN server in Germany, and you’ll be conquering Europe West.

It’s as easy as that.

While there aren’t many countries where you can’t play League of Legends, they do exist.

Because of US imposed sanctions, players in Iran and Syria can no longer access LoL. Try to connect from either country, and you’ll be greeted with this (now infamous) error message:

“Due to US laws and regulations, players in your country cannot access League of Legends at this time.”

To break free of geo restrictions, fire up NordVPN and connect to a server in another part of the world. Then, it’s game on.

NordVPN and League of Legends

What makes NordVPN the best VPN for League of Legends?

For starters, it’s an excellent service – plain and simple. But NordVPN also has some specific advantages over other providers when it comes to LoL:

How To Use NordVPN With LoL?

To start playing League of Legends with NordVPN, here are the steps to follow:

To go back to your regular connection, turn off the VPN. It really is as simple as that.

Ping (a.k.a. latency) is how long it takes data from your device to reach its destination – in this case, a League of Legends server. Low ping is great; high ping makes for a terrible gaming experience.

Generally, all VPNs will increase latency. But, with a fast provider like NordVPN, that increase should be barely noticeable.

And if your ISP is throttling your internet connection when you play games, using a VPN will have the opposite effect – your ping will go down (and sometimes significantly so).

How To Speed up NordVPN With League of Legends?

There are several things you can do to increase the speed of a VPN. So, if you connect to NordVPN and find performance not quite what it should be, here are a few easy potential solutions:

Playing League of Legends over a VPN can make your gaming experience that much better.

If you have trouble connecting to League of Legends, it may fix connectivity issues – especially those caused by your ISP. You’ll be able to jump on any LoL server you want. VPNs will also keep you safe during your gaming sessions from DDoS attacks and other online threats.

Of the many available VPN options, NordVPN is hands down your best bet.

If you haven’t tried them already, definitely consider taking them for a spin – you won’t be disappointed. And with NordVPN’s iron clad 30-day money-back guarantee, you can do it 100% risk-free, too.

Play League of Legends with NordVPN >>