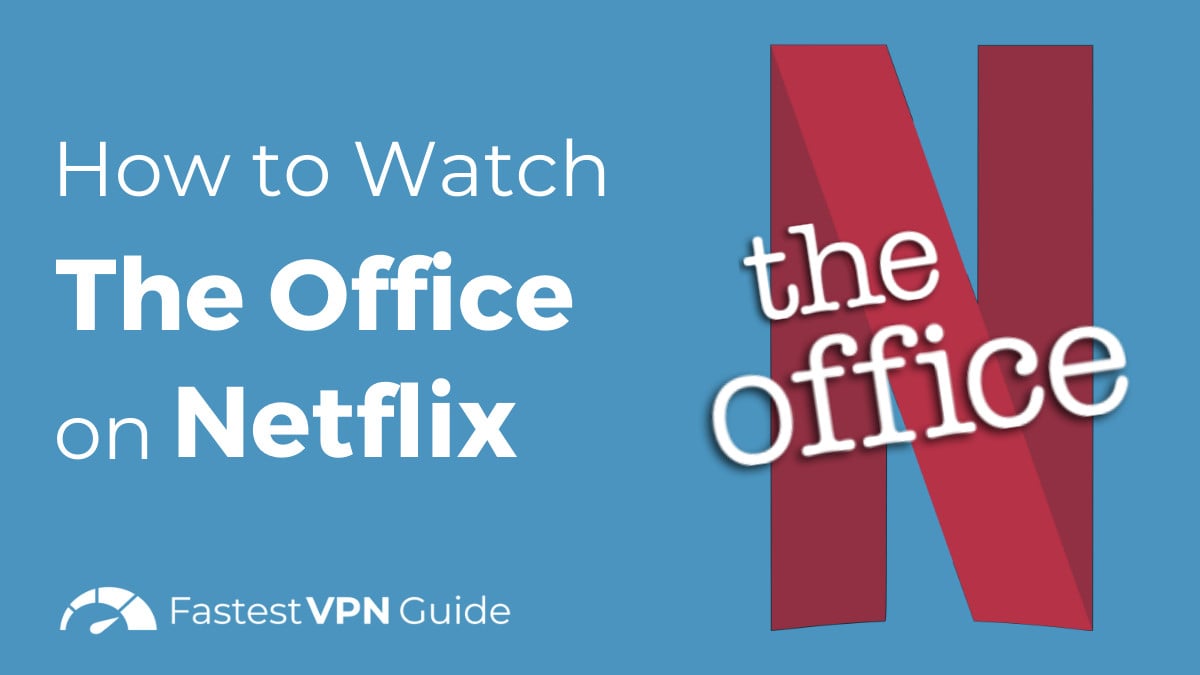 We suspected it was going to happen. And, on January 1st, 2021, it finally did – Netflix US has removed The Office from its library.

Rumor has it, Netflix offered NBC a whopping $90 million to keep the show. But, not that surprisingly, NBC refused and chose instead to bring the series over to its own streaming service Peacock.

So, does that mean we now need to get yet another subscription to watch Michael Scott et al do their thing? Not on my watch.

There is still a way to watch The Office on Netflix. Let me show you how!

Is The Office on Netflix?

Yes, The Office is available on Netflix – just not in the US.

Since Netflix didn’t produce The Office, they must buy a license from the show’s owner NBC to stream it. Unfortunately for Netflix, 2020 saw the birth of NBC’s own (and competing) streaming service called Peacock.

With Peacock up and running, it only made sense to include one of NBC’s most popular programs. Hence, NBC did not renew Netflix’s The Office license.

But there’s a catch. Peacock is a US-only streaming platform. While it made sense for NBC to pull The Office from Netflix America, that wasn’t the case in other countries.

And indeed, The Office is currently available on Netflix in Canada, UK, Australia, Iceland, Japan, South Africa, and Sweden.

How to Watch The Office on Netflix?

The only way to stream The Office off Netflix is to visit a country where it’s still available. That means Canada, Australia, Iceland, Japan, South Africa, Sweden, or the UK.

Thankfully, you don’t have to go there physically. Instead, you can use a simple software solution call a Virtual Private Network (VPN).

Tech details aside, a VPN lets your devices virtually travel to anywhere in the world where the VPN provider runs servers. For most VPNs, that means dozens upon dozens of countries – and certainly those where The Office is still available.

Here, in a nutshell, is how to watch The Office on Netflix when it’s not available locally:

As a bonus, other than letting you stream The Office, there are plenty of other reasons to use a VPN with Netflix, too:

Other Benefits of Using VPNs with Netflix

VPNs are fantastic unblocking tools for geographically-restricted content. You can use them to access any Netflix library in the world.

As long as the VPN provider has servers in the country, you’re set.

Netflix decides which of its libraries to show you based on your IP address. Connecting to a VPN covers up your original IP and replaces it with that of the VPN server.

Suppose the server is in a different country. Netflix will now think that’s where your device is and lets you access that location’s library – just like a local.

So, not only can you watch The Office. All programming that’s not on Netflix US but available elsewhere is now also up for grabs:

All programming is available in its original English format no matter where you connect. But you can also get subtitles (and sometimes audio) in most languages by accessing another country’s Netflix library too.

Are you trying to learn French? Off to Netflix France, you go. Watching Friends with French audio counts as practice, right?

And you can sometimes even get access to new releases before they make it stateside. For example, if you like anime, Netflix Japan is a treasure trove of new movies and series that don’t usually make it to Netflix US until months later (if ever at all).

Best VPNs for Streaming The Office

So, there you have it – a VPN is all you need to watch The Office with your existing Netflix subscription. That said, there is one catch to be aware of:

Not all VPN providers are Netflix-friendly.

What I mean is that because of technical shortcomings, not every VPN can unblock every Netflix library. Some also suffer from performance issues, making streaming higher quality video an exercise in frustration.

To help you choose a provider that works well, here is a tried and tested list of VPNs for streaming The Office. You can use it as a starting point for your research.

Each listed VPN works perfectly with Netflix, and each will give you a buffering and pixelation free streaming experience.

Easily my number one pick for streaming The Office, NordVPN is my daily go-to provider – both for Netflix and much more.

NordVPN has servers in 59 countries, so you can unlock practically every Netflix library in existence.

Remember that The Office is currently available in Canada, the United Kingdom, Australia, Iceland, Japan, South Africa, and Sweden. Those are all locations NordVPN gets you access to. 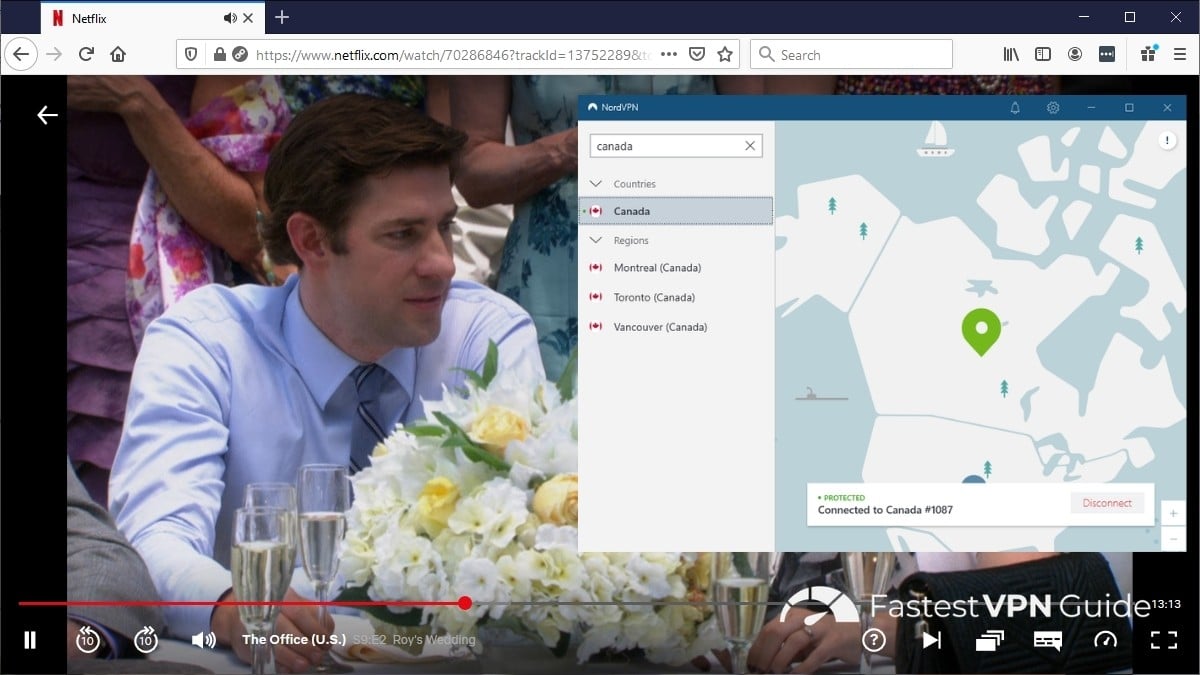 Performance-wise, few providers can top NordVPN. Even when connecting to a country thousands of miles away, streaming Netflix (or any other service, for that matter) is as smooth as can be.

And with six simultaneous connections, everyone in your family can enjoy the show on their own device.

NordVPN tops it all off with excellent 24/7 live chat customer support and an unconditional 30-day money-back guarantee. That’s a whole month you can try NordVPN risk-free.

Another excellent VPN for streaming Netflix is relative newcomer Surfshark. Though don’t let their newness scare you off – Surfshark is one of the best-reviewed VPNs in the market.

They run 3200+ servers in 96 countries – including every location where The Office is currently available on Netflix. 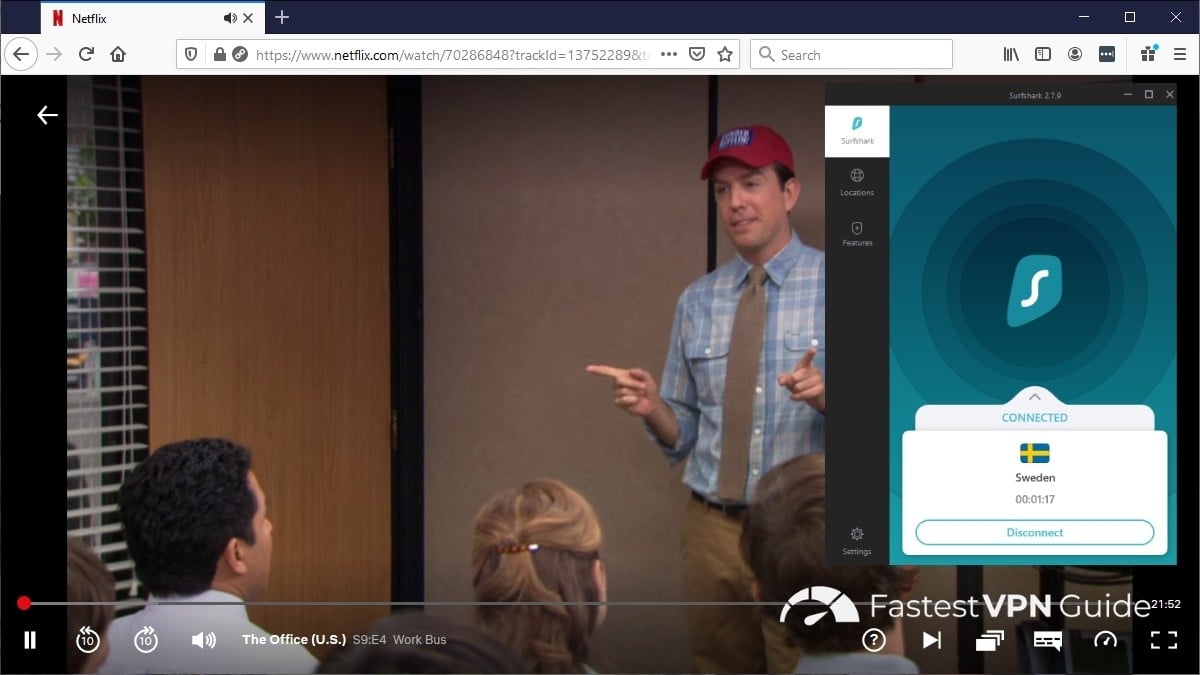 I’ve used Surfshark for Netflix around the world and never had the slightest issue. Connection speeds are great, too.

Surfshark is also the only provider that gives you unlimited simultaneous connections. Talk about a good deal.

And speaking of good deals, Surfshark prices are the lowest of any top-tier VPN. No other provider lets you stream every Netflix library for so little.

CyberGhost has the largest network of my three VPN picks. You get to choose from a whooping 9000 servers in 91 countries. Of course, every location where The Office is available on Netflix makes the list. 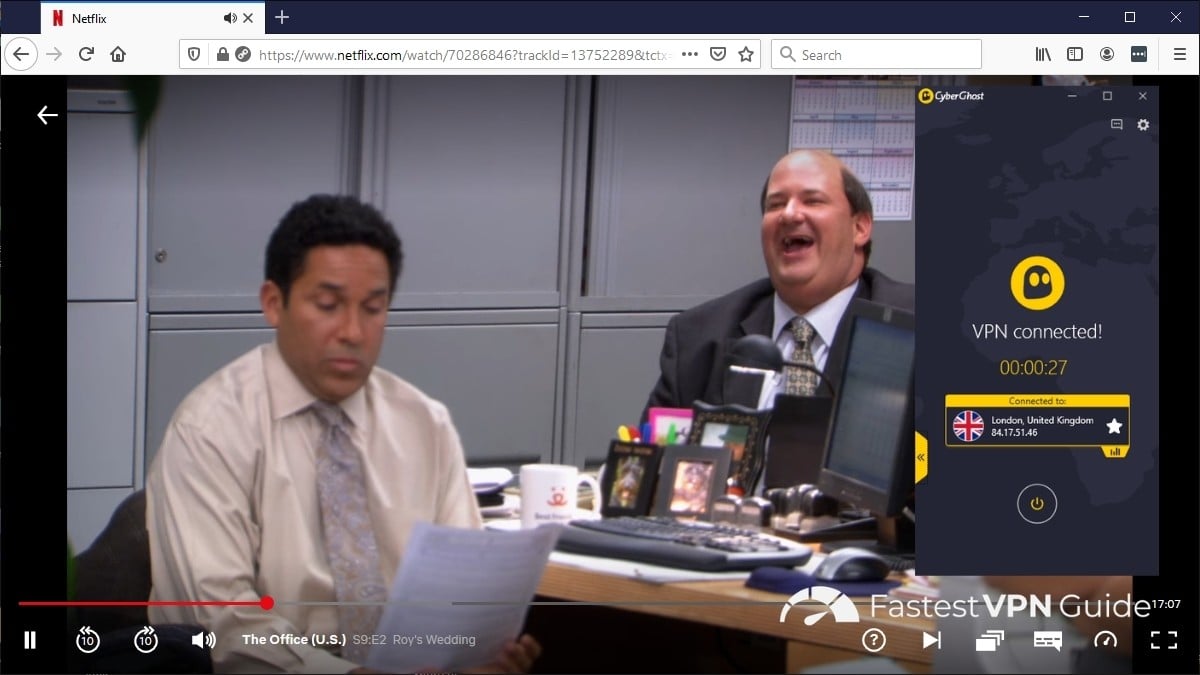 Quality-wise, I’m happy to report good speeds with no buffering or pixelation in sight.

And the provider’s newly re-designed client is easier to use than ever.

CyberGhost has the most generous money-back policy in the business, too. Other VPNs give you 30 days – here you get 45. To me, that shows the company’s belief in the quality of their product. Try them – you won’t be disappointed.

Not All VPN Providers Work with Netflix

As I eluded to earlier, not every VPN unlocks Netflix.

Netflix uses territorial licensing for all shows they don’t make, and those licensing agreements must be enforced. If Netflix didn’t, few content producers would be willing to work with them.

So, to keep copyright owners happy, Netflix cracks down on VPNs and proxies. That’s what the infamous m7111-5059 error code is all about that. 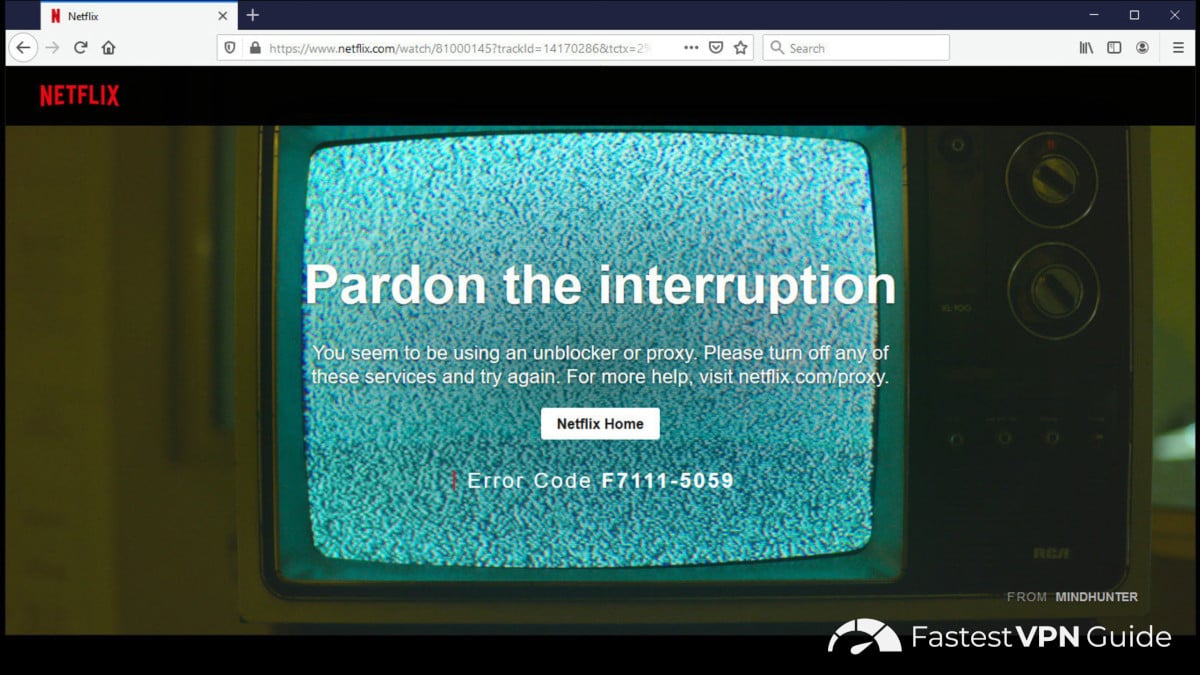 Netflix crawls the internet for known VPN IPs and bans them from accessing their platform. If we try to stream a show with a blocked IP, access is denied.

So why do some VPNs still work with Netflix?

Because they choose to dedicate significant resources to keep their IPs clean. Whenever Netflix bans one, the VPN quickly replaces it. That lets us, their customers, enjoy uninterrupted streaming – no matter what Netflix does.

However, not all VPNs can afford to or are willing to do the above. Some providers simply lack the resources. Others don’t make Netflix a priority.

That’s why a bit of research before choosing a VPN for streaming The Office on Netflix is so important. You don’t want to end up with a dud.

Will Free VPNs Unblock The Office on Netflix?

Free VPNs are tempting. And, in theory, yes, they might unlock The Office.

In practice, however, these providers don’t have the means to stay ahead of the Netflix VPN ban. So, 90%+ of the time, they will be blocked.

And what if you’re lucky enough to find one that works?

Well, your bandwidth is still metered. Just about all free VPNs cap your data use, which means you may only be able to watch a handful of episodes per month. For serious The Office binges, that simply won’t do.

Is It Legal to Use a VPN to Watch Netflix?

Netflix clearly doesn’t like VPNs. So, is using one to watch it legal?

In the US, VPN use is perfectly fine. The same is true in most other countries.

Only a handful of locations put restrictions on VPN use. North Korea and Iraq have completely outlawed them. Other countries like China, Russia, and Turkey only allow government-approved providers.

And what about those territorial agreements?

These are contracts between Netflix and content owners. It’s not your responsibility to uphold them – it’s Netflix’s. So, while the streaming platform can block VPN traffic, they can’t penalize you for using one.

So, stream away. Using a VPN to watch The Office (or any other show) on Netflix is definitely not against the law.

The Office and Netflix Final Thoughts

Don’t be down about losing The Office on Netflix US. And don’t worry about having to get Peacock. Get a VPN and stream the show (and many others) from Netflix Canada (or the UK, or Sweden…) instead!

To watch The Office simply: