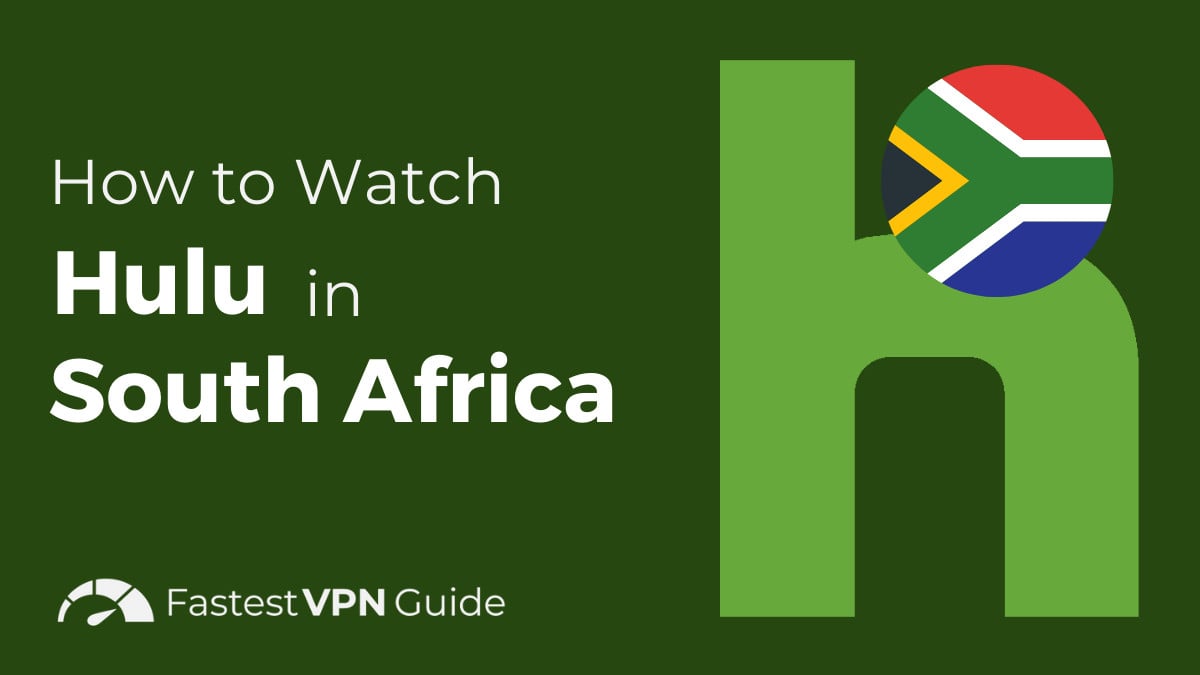 If you would like to stream the latest American TV shows in South Africa, a service like Hulu is your best bet. Unfortunately, by default, it and most others like it are restricted to only work in the US.

But, even if things initially seem like a lost cause, fret not. There is indeed a way to watch Hulu in South Africa.

The only things you need are a VPN and a Hulu account. And fortunately, both of these are very easy to set up, even when you’re thousands of kilometers away from the US.

How to Watch Hulu in South Africa

A couple of these steps – specifically picking the right VPN and creating a Hulu account – are a little more involved. I cover both in much greater detail below.

Why a VPN Unblocks Hulu

Hulu geo restricts access to their content to US residents because of copyright limitations. It’s a practice known as geoblocking and one in which your IP address plays a crucial role.

Among a few other things, your IP reveals your physical location – usually to with a few kilometers. All Hulu has to do is check it to figure out where you’re located and shut the door if you’re not in the US.

Does this screen look familiar? 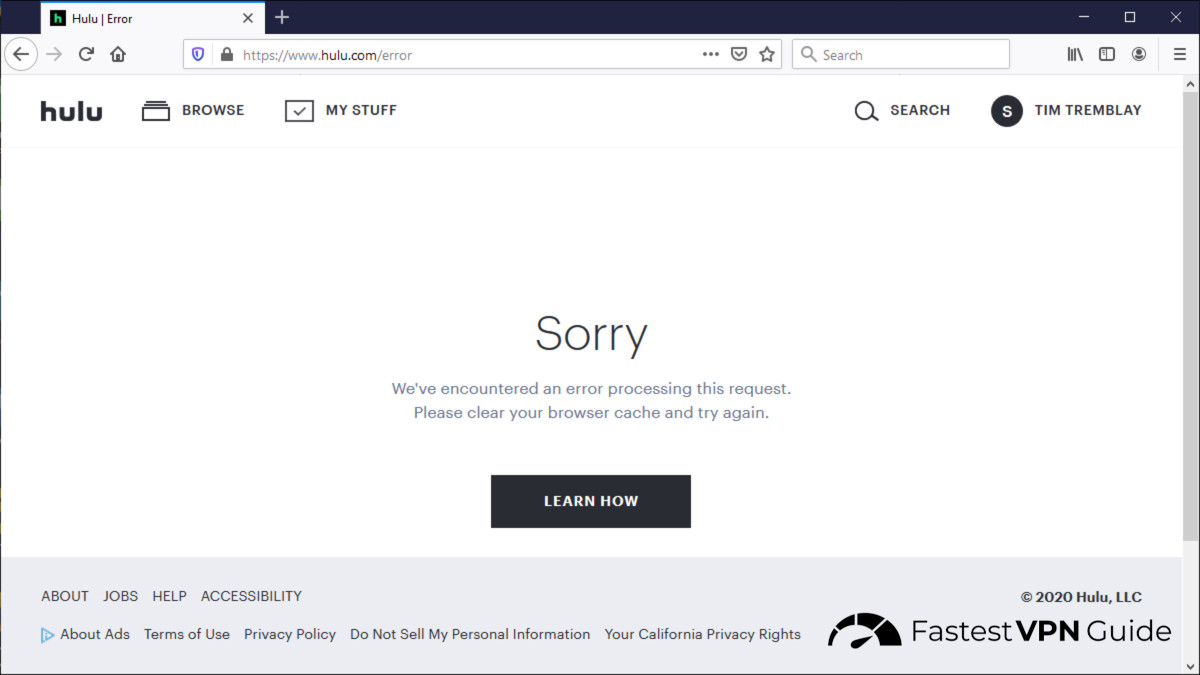 When you use a VPN service, you connect to one of its servers. Your traffic is then routed through that private server before reaching the internet at large.

The key thing that happens during that process is your original IP address is stripped off and replaced by that of the VPN server. So, connect to a server in the US, and like magic, your South African IP turns into an American one.

Because Hulu doesn’t know any better, it now thinks you’re in the United States and lets you watch as if you were a local.

As an aside, this method can also be used to access other streaming services around the world, from any country’s Netflix library to the UK’s BBC iPlayer.

Which VPNs Work Well With Hulu

The above may sound too good to be true, and there is indeed one caveat. Not all VPN services unblock Hulu.

Streaming services like Hulu know all about VPNs and increasingly try to crack down on their use. Over time, they can figure out which IP addresses belong to VPN servers and lock them out.

On the opposite end, VPN providers can detect when that happens and swap out the blocked IPs for new ones that work. But it’s a resource-intensive process and something only a few VPNs can afford (or are willing) to do. Hence, choose carefully.

Performance is another significant consideration when picking the best VPN provider to stream Hulu. Only look at providers with excellent server speeds and unlimited bandwidth.

Choose a slow VPN, and TV night will likely turn into a frustrating, pixelated, and constantly interrupted experience.

So, which VPNs are a good choice for Hulu?

I like to use Surfshark. In my experience, they’re the most consistent provider at unblocking Hulu (as well as most other streaming services). They also offer fast speeds and are super simple to use.

The other thing that makes me lean towards Surfshark is the price. The service’s monthly cost is about the price of a cup of cappuccino – VPNs don’t get any cheaper. 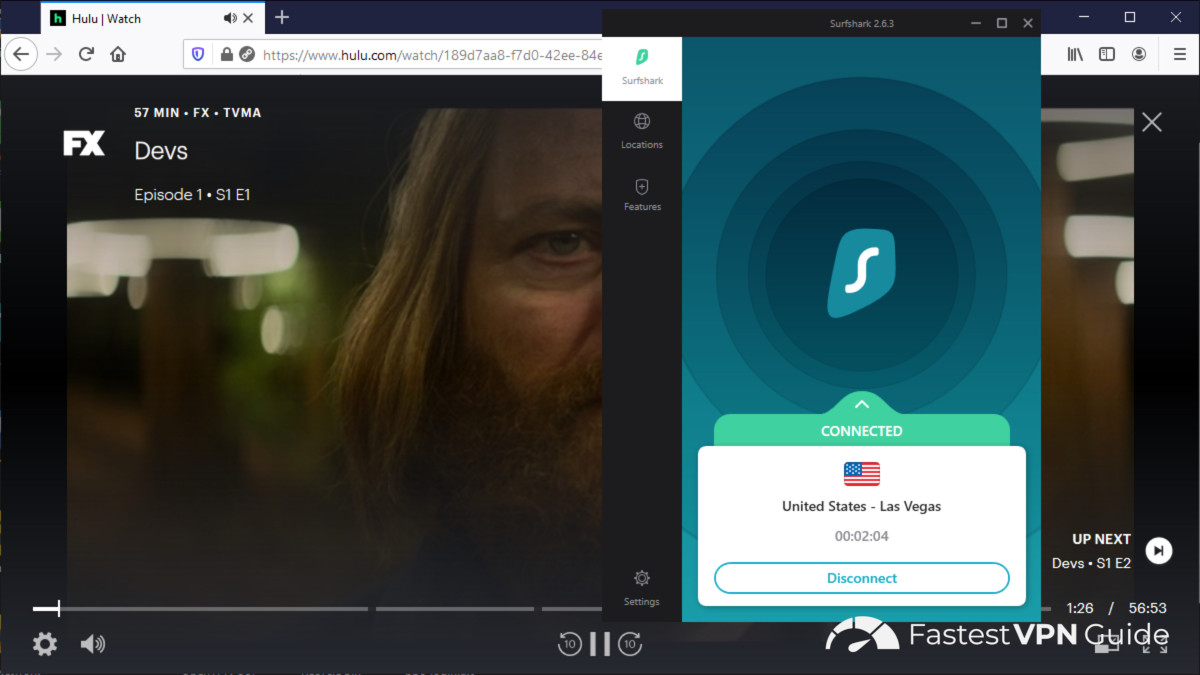 That said, if, for some reason Surfshark is not to your liking, there are a few other excellent options.

NordVPN is a top-notch alternative. They’re just as reliable as Surfshark and will let you stream Hulu, Netflix, and plenty of other online video providers – all from the comfort of your home in South Africa.

Two other great choices to consider are PureVPN and CyberGhost. Both make streaming a priority and offer servers optimized specifically to watch Hulu. You can’t go wrong with either.

All four VPNs I mentioned above come with at least a 30-day money-back guarantee (CyberGhost gives us 45 days). So whichever provider you opt for, you’ll have lots of time to try it and make sure you like it – absolutely risk-free.

How To Create a Hulu Account From South Africa

The second stumbling block to watching Hulu from South Africa, even with a VPN, is creating an account.

Hulu is an American only service. Hence, they only accept American forms of payment. Try to enter your South African credit card details, and you’ll find they will be quickly rejected. The same applies to any PayPal account registered outside the US.

The good news is that Hulu accepts one other form of payment – gift cards. And that’s what we’ll be using.

You obviously can’t just pop into your local SA corner store and buy a Hulu gift card. But you can easily do so online (isn’t the internet great). 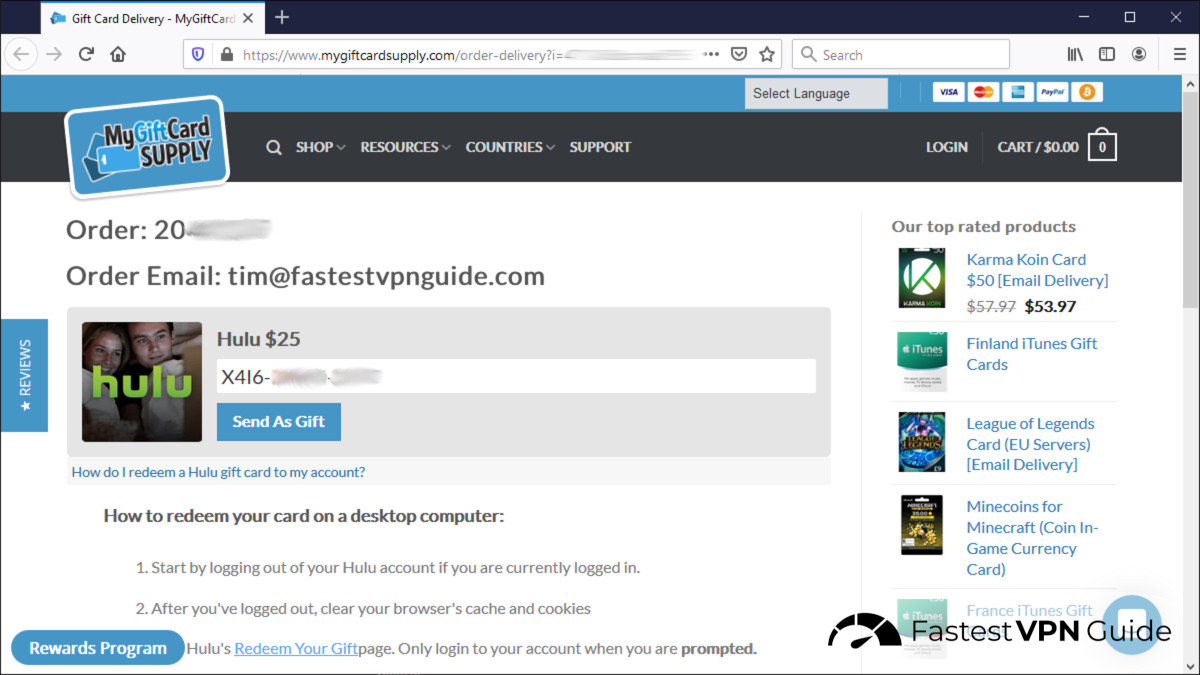 Here are the steps to create a Hulu account in South Africa:

As you can see, there’s not much to it.

To cover all the bases, here are answers to the most commonly asked questions about streaming Hulu from South Africa.

Is Hulu Available in South Africa?

Hulu is a US-only streaming service, so officially, it’s not available in South Africa.

That said, you can use a VPN to unblock access from SA. Please see above for detailed instructions and a list of working VPN providers.

How Much is Hulu?

Buying a Hulu subscription in South Africa won’t cost you any more than if you bought it in America – minus any currency conversion fees.

What Shows Are Available on Hulu?

Content on Hulu is a mix of Hulu originals that are only available on the service and well-known TV series from US channels like ABC, CBS, Fox, and more. The service also features many blockbuster movies.

A few recognizable titles include Futurama, Modern Family, Seinfeld, Shrill, The Simpsons, and This is Us. All programming is available with the cheapest Hulu subscription.

Is Hulu Coming to South Africa?

Hulu was designed to be an affordable alternative to cable for American viewers. As such, the company currently has no plans to expand their service to any other country, including South Africa.

Despite how things may seem initially, watching Hulu in South Africa is possible. All you need is the right VPN – one that works with the service and is fast enough for high-quality video streaming.

For my own outside-of-the-US Hulu access, I like to use Surfshark. They check all the right boxes to let me watch what I want, from where I want, whenever I want – and all at a price that doesn’t break the bank.